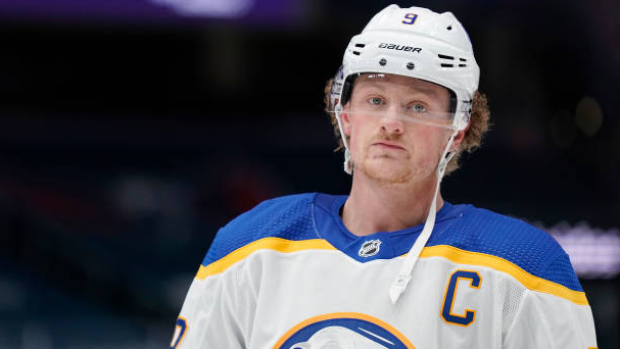 BUFFALO, N.Y. (AP) — Sabres captain Jack Eichel is nearing a resolution with the team over how to treat a herniated disk following a lengthy discussion with general manager Kevyn Adams.

What the outcome will be — and what it means for his uncertain future in Buffalo — remains unclear.

In a text sent to The Associated Press on Thursday, Eichel’s agent Peter Fish did not go into detail in writing: “We are communicating with the team and are heading toward a resolution.”

Adams declined to elaborate except to say he had a lengthy conversation with Fish a day earlier. Adams also said the team’s stance in denying Eichel’s request to have surgery hasn’t changed since the player first revealed in May what he called “a disconnect” with the Sabres over how to treat the injury which sidelined him for the final two months of the season.

While Eichel favors cervical disk replacement surgery, the Sabres medical staff has recommended against it because it hasn't been performed on an NHL player.

“Our stance hasn’t changed and where we’re at. It’s in the hands of the medical experts,” Adams said. “That’s what I said previously and it’s where we’re at right now. That’s the best I can give you.”

Eichel’s uncertain status overshadowed what was supposed to be Don Granato’s formal introduction as the team’s new coach. In replacing Ralph Krueger, who was fired in mid-March, Granato finished the season as the Sabres interim coach before being hired to take over on a full-time basis on Tuesday.

In reference to Eichel, Granato said he’s preparing for any scenario.

“We don’t know what might happen, what will transpire. But we will be prepared to move in a direction,” he said. “Whatever the scenario is, we’ll be ready for it. We will adjust and acclimate without compromising the direction we want to go. So I’m confident and comfortable in that.”

Granato takes over a team whose season-long troubles spilled over into the offseason. Buffalo finished last in the overall NHL standings for a fourth time in eight years, and extended its playoff drought to 10 years.

Eichel then caused a stir in his season-ending interview with reporters by revealing the rift with the Sabres and questioning his future with the team. The player selected with the No. 2 pick in the 2015 draft represents the face of the franchise and its highest-paid player.

Eichel completed the third year of an eight-year, $80 million contract with a no-movement clause that doesn’t kick in until next summer.

Adams hasn’t ruled out making significant changes to his roster, including the potential of trading Eichel. Forward Sam Reinhart, who led the team in scoring last season, and veteran defenseman Rasmus Ristolainen also expressed frustration in saying they would be open to a change of scenery.

Adams, on Thursday, reiterated his vision in saying he wants coaches and players who want to be part of the solution in Buffalo.

Adams declined to say whether he was specifically referring to Eichel.

“It’s bigger than focusing and singling out people. I think the point of saying that is we need to establish a culture here of people on the ice, staff across the organization that are proud, that this is something really special,” he said. “We won’t compromise on that.”