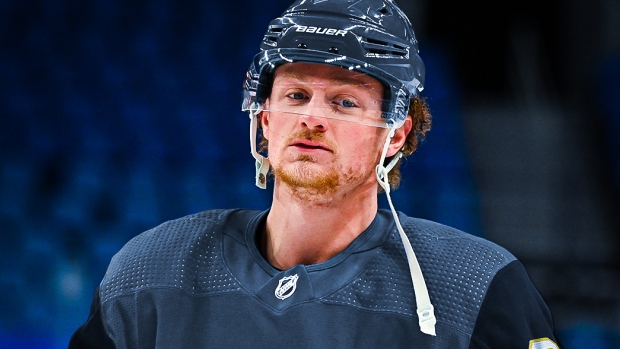 The Jack Eichel era in Buffalo is finally over.

The Sabres are trading the three-time All-Star centre and former team captain to the Vegas Golden Knights, ending what had become a contentious relationship between player and team.

Forwards Alex Tuch and Peyton Krebs, a 2022 first-round pick and a second-round pick in 2023 are going back to the Sabres, who will send a 2023 third-round pick along with Eichel to Vegas.

Tuch has not played this season after undergoing shoulder surgery in late July. He was given a six-month timeline for recovery after the operation. The 25-year-old, who is signed at a cap hit of $4.75 through the 2025-26 season, had 18 goals and 33 points in 55 games last season.

Eichel set for his surgery

The 24-year-old Eichel remains sidelined with a neck injury he’s been dealing with since last March. Limited to 21 games last season, Eichel had two goals and 18 points.

Though Eichel expressed discontentment over his team's lengthy playoff drought in the spring of 2020 (“I’m fed up with the losing and I’m fed up and I’m frustrated,” the North Chelmsford, MA native said at the time), most of what Eichel called a "disconnect" between the player and the Sabres in May comes from how to treat the herniated disc in his neck.

While Eichel wished to undergo disc replacement surgery, the Sabres balked at the idea and favoured fusion surgery, citing the fact that no NHL player had ever undergone the replacement procedure before.

Jack and his team have been working diligently to sort out next steps. He will have artificial disc replacement surgery. #VegasBorn

With Eichel's injury still untreated, he failed his physical prior to the start of the season and was stripped of his captaincy with the Sabres by general manager Kevyn Adams.

In an effort to speed along a move away from the Sabres, Eichel made a change in representation in September, hiring agent Pat Brisson.

Selected second overall pick in the 2015 NHL Entry Draft out of Boston University, Eichel has appeared in 375 career games with the Sabres over six seasons, scoring 139 goals and adding 216 assists.

In the fall of 2017, Eichel signed an eight-year, $80 million extension with the Sabres, leaving four years after the current season remaining on his deal.

Internationally, Eichel has represented the United States on a number of occasions, including as part of a bronze medal-winning effort at the 2015 IIHF World Hockey Championships in the Czech Republic.

Eichel will become the 11th member of the Golden Knights carrying a cap hit of $5 million or more, his $10 million salary is the team's highest, ahead of Mark Stone ($9.5M AAV), Alex Pietrangelo ($8.8M AAV) and Max Pacioretty ($7 million AAV).