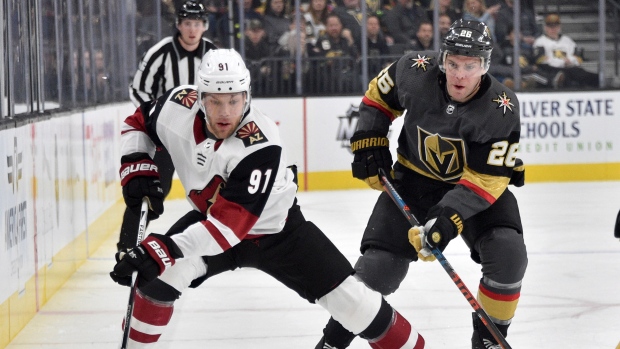 BUFFALO, N.Y. — The Buffalo Sabres are banking on Taylor Hall to turn what was a long and unsettled off-season into a far brighter immediate future.

Buffalo became the surprise team to win the Hall free-agency sweepstakes by signing the 10th-year forward and six-time 20-goal-scorer to a one-year, $8 million contract Sunday night.

TSN Hockey Insider Darren Dreger notes that the contract breakdown is $1 million in signing bonus and $7 million in salary.

His addition, even for one year, provides the Sabres a much-needed boost of instant credibility — and offence — after missing the playoffs for a franchise-worst ninth straight year. The drought is the NHL’s longest active streak, and one short of matching a league record.

“I certainly hope that the players and coaches and our staff and the organization are excited, and our fans are excited,” general manager Kevyn Adams said. “This is a great step. But we’re in a position right now where we have to go earn it. We have to go get better every day.”

“We believe in Taylor as a player and a person, and we hope this turns into a long-term relationship for both sides that works,” he said. “We’ll see where that goes.”

Hall won the Hart Trophy as the NHL’s MVP in 2018, when he posted career bests 39 goals and 93 points with the New Jersey Devils. Over the past three season, his 1.05 points-per-game average ranks 17th among NHL players.

Hall joins his fourth team since being the No. 1 pick in the 2010 draft. And he’s on his third team in two years after the Devils traded him to the Arizona Coyotes in the middle of last season.

The deal came together after the Sabres made landing Hall their top priority in free agency, with second-year coach Ralph Krueger playing an integral role.

Krueger was an assistant in Edmonton during Hall's rookie season, and then spent the 2012-13 lockout shortened year as the Oilers coach. In Hall’s one season playing under Krueger, he had 16 goals and 34 assists for 50 points in 45 games.

“I think the way that Ralph had built a relationship with Taylor previously, absolutely played a big role in this,” Adams said. “I know they spent quite a bit of time over the last few days talking. That to me is what’s critical in this, that we got to a place on both sides that there was a comfort level and we all wanted the same thing.”

The Coyotes acquired Hall in bid to use the remainder of the season to convince the pending free-agent to stay in Arizona. A resolution couldn’t be reached after Hall had personal meetings with Coyotes ownership, and amid internal turmoil that led to general manager John Chayka’s abrupt resignation just before the playoffs began.

Hall, who has appeared in just 14 post-season games, expressed a desire to join a contender after the Coyotes were eliminated by Colorado in the first round in August. He instead joins a Buffalo team that hasn’t reached the playoffs since 2011, and not won a series since reaching the Eastern Conference final in 2007.

Hall immediately addresses Buffalo’s lack of secondary scoring behind the top line centred by captain Jack Eichel, who led the team with a career-best 38 goals in 78 games. Forward Jeff Skinner particularly experienced a dip in production playing on the second line. A year after scoring a career-best 40 goals, Skinner managed just 14 last season.

Sam Reinhart and rookie Victor Olofsson, Eichel’s linemates for much of the season, were Buffalo’s only two players to top 20 goals.

Buffalo is coming off a a tumultuous off-season in which general manager Jason Botterill and much of his staff and scouts were fired, and replaced by Adams, who had no previous NHL front-office experience.

Adams has already attempted to upgrade his second line by acquiring veteran centre Eric Staal in a trade with Minnesota last month.

The Sabres entered free agency about $26 million under the NHL’s salary $81.5 million cap, and are currently projected to have about $14 million of space available following Hall’s addition. A large chunk of their remaining payroll will be eaten up by restricted free agents Reinhart, Olofsson and goalie Linus Ullmark, who have all opted for salary arbitration this off-season.

Buffalo will have to keep space open next off-season, with star defenceman Rasmus Dahlin due for a hefty raise after completing his three-year rookie contract.