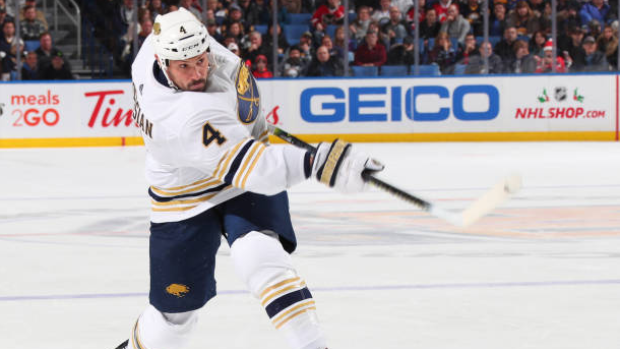 BUFFALO, N.Y. — The Buffalo Sabres suspended defenceman Zach Bogosian on Monday for failing to report to the minors.

In a text to The Associated Press, Bogosian’s agent, Darren Ferris, wrote: “We are aware of the notice of suspension and will not be providing a comment at this time.”

Bogosian’s options are limited, and he now risks losing out on what’s left of the $6 million he is owed in the final year of his contract.

The developments come a little over a week before the NHL’s trade deadline on Feb. 24, and some three months after Bogosian requested to be traded.

The chances of the Sabres finding a trade partner were already slim in part because of the value of his contract. Another issue is Bogosian’s lack of playing time.

He missed the first 22 games of the season while recovering from his second hip operation in three years. He was a healthy scratch in seven of Buffalo’s eight games before being placed on waivers.

Bogosian has a goal and four assists in 19 games this season, and 53 goals and 141 assists in 636 career games. He was acquired by Buffalo in February 2015 in a multiplayer trade with the Winnipeg Jets.

The Sabres also signed minor league forward Taylor Leier to a one-year, $700,000 two-way contract, making him eligible to be called up to Buffalo this season. Leier has seven goals and an assist in 17 games with Rochester this season.

The Sabres have won three straight and play at Ottawa on Tuesday night.