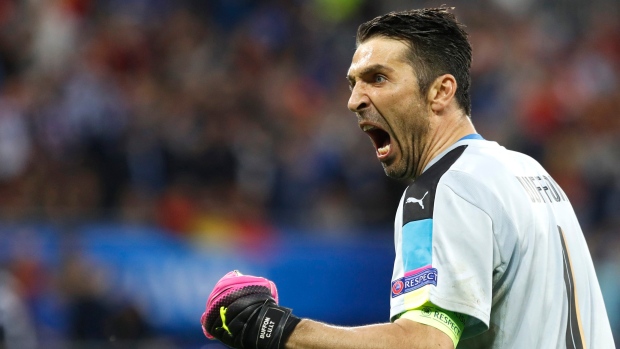 Twenty years after making his Italy debut on a snowy field in a World Cup playoff in Russia, the Azzurri captain's international future hinges on another playoff against Sweden.

If Italy advances, Buffon can conclude his Italy career where it started at next year's tournament in Russia.

A loss would almost certainly mark his final appearance for the national team.

"It's a nice connection but I would have gladly done without it," Buffon said. "It's always a risk. The important thing is that the result is the same as 20 years ago."

In one of the four European playoffs, Italy travels to Stockholm for the opening leg on Friday. The return match will be at the San Siro in Milan three days later.

Buffon, who turns 40 in January, has made a record 173 appearances for Italy. That's fourth most worldwide after record-holder Ahmed Hassan's 184 for Egypt, Mohamed al-Deayea's 178 for Saudi Arabia and Claudio Suarez's 177 for Mexico.

The three players ahead of him on the list are retired, meaning Buffon could surpass them all if Italy qualifies.

More impressively, Buffon could also become the first player to be a squad member in six World Cups.

Buffon first went to the tournament back in 1998, but was a second-choice option as goalkeeper behind Gianluca Pagliuca and didn't play. He could match Germany great Lothar Matthaus and former Mexico goalkeeper Antonio Carbajal as having played in five World Cups.

At this culminating point in his career, Buffon was asked to compare himself now to when he made his Italy debut at 19.

"I miss a bit that carefree spirit and cockiness typical of a young player," he told RAI state TV. "The more you win the more you commit errors and the more you learn. Then you mature and learn to count to 10. Now I'm more contemplative and I hope that I've also become a better goalkeeper."

Buffon was one of the driving forces behind Italy's run to the 2006 World Cup title, when he didn't concede a single goal to opponents during normal play over the course of seven matches — letting in only an own-goal from Cristian Zaccardo and a penalty from Zinedine Zidane in the final against France.

He helped Parma to the UEFA Cup title way back in 1999 and has since won eight Serie A titles with Juventus — including the last six.

There have been nearly as many lows as highlights, though.

At the 2004 European Championship, Italy was eliminated without losing a match when Sweden and Denmark drew their final group match 2-2 in what the Azzurri saw as a prearranged result that sent the two Scandinavian sides through.

"Time passes. Getting eliminated from those Euros burned but if we had done better earlier there wouldn't have been any problems," Buffon said. "If you consider yourself a strong player then you know that your destiny lies in your own hands."

Buffon and Juventus had two Serie A titles taken away due to the 2006 "Calciopoli" refereeing scandal. He weathered a personal betting scandal shortly before helping the Azzurri to the 2012 European Championship final.

That was sandwiched in between two first-round eliminations at the last two World Cups.

Buffon has also been on the losing side in three Champions League finals with Juventus, the first in 2003 and the other two over the last three seasons.

Buffon announced in June that this season will be his last unless Juventus wins the elusive Champions League, in which case he would continue for one more season to try and also win the Club World Cup and other trophies.

After all, he's still at the top of his game. Two weeks ago, Buffon was named UEFA club goalkeeper of the year.

"I used to battle the unknown with excessive exuberance that might have seemed like irreverence toward the world," Buffon said. "Now I know well what I'm facing."