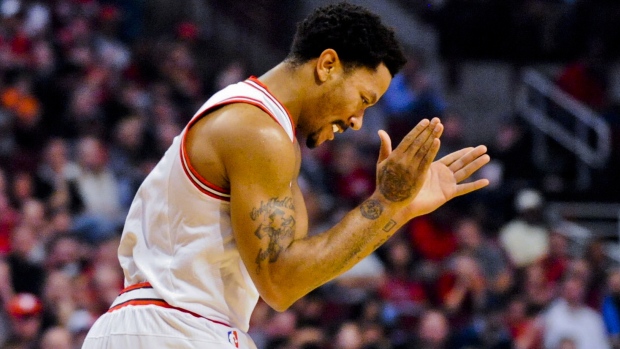 CLEVELAND - Chicago Bulls star guard Derrick Rose says he has no pain in his right shoulder and doesn't expect to have any problems going into Game 2 against the Cleveland Cavaliers.

Rose sustained a "stinger" in his shoulder late in Chicago's 99-92 win over the Cavaliers in the series opener on Monday night. Rose says he's "not sore or anything, so that's a good sign." He scored 25 points with five rebounds and five assists, showing flashes of the player he was before being slowed by knee injuries the past few years.

Rose doesn't think the shoulder will affect him in Wednesday's game. He got hurt when he tried to squeeze through a screen and banged his shoulder into Cleveland forward Tristan Thompson.

The Bulls didn't practice on Tuesday and instead watched film and had a walkthrough at their downtown hotel.

Rose teamed with Pau Gasol on a pick-and-roll to exploit Cleveland's defence in the opener.