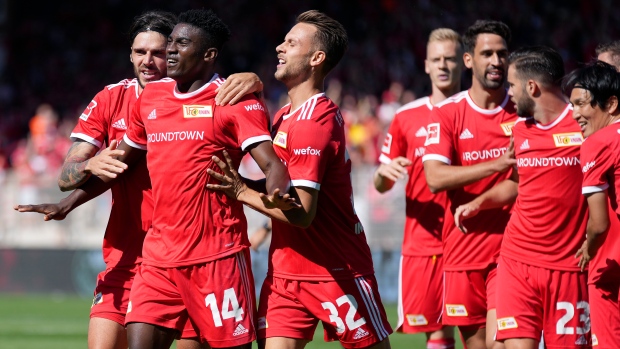 BERLIN (AP) — Union Berlin and Bayer Leverkusen drew 1-1 in their opening Bundesliga game on Saturday, while promoted teams Greuther Fürth and Bochum made losing returns to the league.

Pellegrino Matarazzo’s Stuttgart team routed Fürth 5-1, and Bochum had a player sent off in the fourth minute before losing 1-0 at Wolfsburg.

Union’s stadium was half full for Leverkusen’s visit under new regulations after a season in which fans were shut out due to coronavirus restrictions, with supporters once again milling around, drinking beer and enjoying grilled sausages and steaks before the game. A huge banner facing the field called for an end to restrictions and stadiums to be filled.

However, some Union fans whistled when Leverkusen players Nadiem Amiri and Jonathan Tah’s names were read out during the lineup announcements. Amiri was insulted by Union’s Florian Hübner in the sides’ previous meeting, when Tah made allegations of racist abuse.

Taiwo Awoniyi gave Union a seventh-minute lead, but Leverkusen answered with a period of pressure and Moussa Diaby equalized in the 12th.

Both sides missed chances to win the game.

It was the first time Union avoided defeat in its opening Bundesliga game of the season at the third attempt.

Second-division champion Bochum got off to a bad start when Robert Tesche was sent off early for preventing a Wolfsburg goal with his arm.

Manuel Riemann saved Wout Weghorst’s penalty, but the Dutch striker made up for his miss in the 22nd, when American John Brooks set him up for what proved to be the winner.

Wolfsburg offered supporters who bought five tickets for its game against Bochum a sixth ticket free in reference to using too many substitutions in the German Cup the weekend before. It could be thrown out of the competition as a result, with the German soccer federation due to make a decision on Monday.

Stuttgart’s win was marred by a serious injury to 17-year-old forward Mohamed Sankoh.