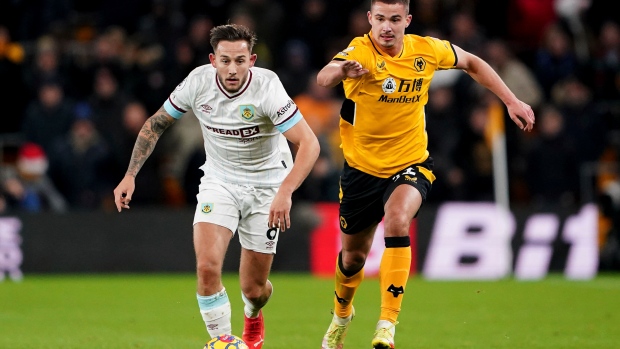 WOLVERHAMPTON, England (AP) — Burnley maintained its impressive record against Wolverhampton by securing a 0-0 draw in the Premier League on Wednesday to make it six matches unbeaten against its opponent.

It was the first time Burnley had played since a thrilling 3-3 draw with Crystal Palace last month, with snow forcing the postponement of its home match against Tottenham on Sunday.

Although a point will not please Burnley manager Sean Dyche too much, his team is proving tough to beat with just one loss from its last eight Premier League games.

Only the top three teams in the league had conceded fewer than Wolves coming into the match and the hosts kept their third straight clean sheet.

However, Wolves' goal drought also continued, as it has netted just once in the last four games.

Burnley stayed in the relegation zone but reclaimed third-to-last place from Norwich. Dyche's team has a game in hand.

The biggest danger Wolves caused Burnley came on the half-hour mark as Adama Traore led a counterattack with his renowned pace.

Raul Jimenez joined him and created a two-on-one situation where the two Wolves forwards were running at Charlie Taylor. Taylor forced Traore wide and the Spanish forward's shot from distance crashed off the bar.