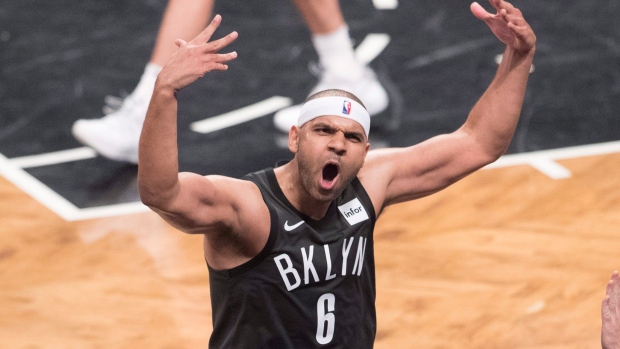 Jimmy Butler didn't like the way Dudley tried to show it.

They both ended up getting ejected Saturday after their reactions led to a scuffle.

Butler and Dudley were thrown out in the third quarter of the Philadelphia 76ers' 112-108 victory over the Brooklyn Nets after pushing and shoving that spilled into the stands.

Dudley reacted to Embiid's hard foul on Jarrett Allen, bumping the 76ers' All-Star centre. Butler then shoved Dudley from behind to start the scrum.

Dudley had been inserted into the starting lineup in Game 4 and was agitating the 76ers with his defence and his talking to Ben Simmons.

"I don't be paying attention to him too much," Butler said. "I just don't think you should run up on anybody like that."

"Especially because the foul was actually all ball," Embiid interjected.

That's not the way the referees saw it, with crew chief Ed Malloy saying they ruled it a flagrant 1 after a video review because of Embiid's windup and unnecessary contact.

Dudley and the Nets had already been angered by Embiid, who elbowed Allen in Game 2 and was given a flagrant 1 that the Nets thought should have been a 2, which means an automatic ejection. They were further upset when he laughed afterward while apologizing during his postgame news conference.

"Yeah, for sure I send a message," Dudley said. "When you have a guy giving flagrant fouls, I mean Joel Embiid is second in the league in flagrant fouls. So for that elbow he had before just to have a flagrant 1, no fine, no nothing, laughing in the media, if you think that a team that I play on is going to have (to accept) that, that's another thing coming, especially on this young team."

Simmons and Dudley — who had exchanged words earlier — along with Malloy all went tumbling into the front row as referees rushed in to intervene. Dudley and Butler were both given technical fouls — with Embiid saying he planned to pay Butler's fine.

"Dudley and Butler were ejected for their role as escalators, from taking a situation that was under control and escalating it to a heightened altercation," Malloy said.

Malloy said referees also looked at the roles of Simmons and the Nets' D'Angelo Russell during their lengthy video review but determined they were acting as peacemakers who did not escalate the situation.