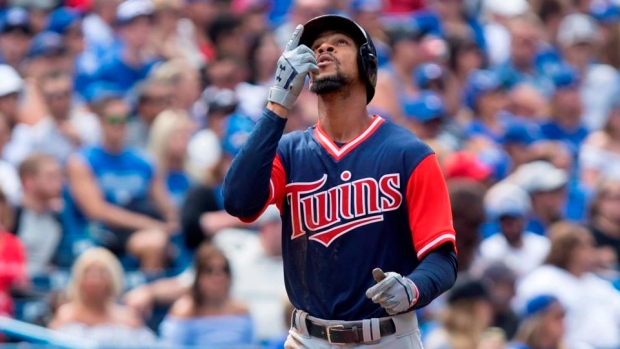 TORONTO — Byron Buxton had just about everything go his way on Sunday.

The Twins centre-fielder finished 4 for 5 with a career-high three home runs and five runs batted in to lead Minnesota in a 7-2 victory over the Toronto Blue Jays.

"Some days you have like this where everything seems to be falling you way," said Buxton. "Today was one of those days for me.

"I was seeing the ball good, being aggressive and not missing my pitches."

Buxton was also the only Twins batter to not strike out during the game. The rest of his teammates combined on 17 strikeouts, a season-high for Toronto's pitching staff.

After going 0 for 3 with a strikeout in Minnesota's 10-9 loss on Saturday, Buxton said he made changes in his approach for Sunday's series finale.

"Yesterday I took a few pitches that I could have handled, I felt like, early in the game," he said. "Today I just said 'If they're going to challenge me with pitches in the zone, be a little bit more aggressive.'"

Sunday marked Buxton's first career multi-homer game. The 23-year-old is the eighth Twin in franchise history to go deep three times in a single game and the second this season. Eddie Rosario accomplished that feat on June 13 against Seattle.

Buxton finished the three-game series against the Blue Jays 7 for 13 with seven RBI's.

"He's got a lot of ways he can help you win games — his legs, bunting, home runs, defence, arm," said Twins manager and former Blue Jay Paul Molitor. "It's fun to watch some of that talent start to flourish."

Kyle Gibson (8-10) went 6 2/3 innings, allowing just two earned runs and striking out seven as the Twins (67-63) picked up their first series win in Toronto since taking two of three in June 2014.

Nori Aoki supplied all the offence for the Blue Jays (61-69), who have dropped seven of their last nine games. Aoki hit a solo homer and drove in another run with an RBI single.

Buxton knocked Joe Biagini from the game with two out in the fourth, taking the right-hander's 0-1 curveball over the wall in left for a two-run home run that gave Minnesota a 5-1 lead.

"Good hitters being thrown bad pitches on a couple of occasions," Biagini said of his struggles. "I felt like early in the game I was doing a decent job of attacking and some times you just can't control where the ball goes exactly. Obviously there were things I could've done better being in those situations."

Biagini (3-9) allowed five earned runs on nine hits over 3 2/3 innings while striking out four and walking three in his first start since July 2.

"I thought at times he was over throwing a bit too much, the ball was definitely up in the zone," said Blue Jays manager John Gibbons. "They barreled him pretty good, but he put in a lot of hard work to get back here."

The Twins got to Biagini in the first inning on Buxton's RBI single, which scored Jorge Polanco from second.

Aoki tied it 1-1 on his single in the second, but Kennys Vargas' base hit scored Rosario and Buxton in the third to give Minnesota a 3-1 lead.

Buxton put Matt Dermody's slider into the second deck for a solo home in the seventh for a 6-2 Twins lead. Then in the ninth, Buxton hit Tim Mayza's first pitch out of the park for his 13th homer of the season.