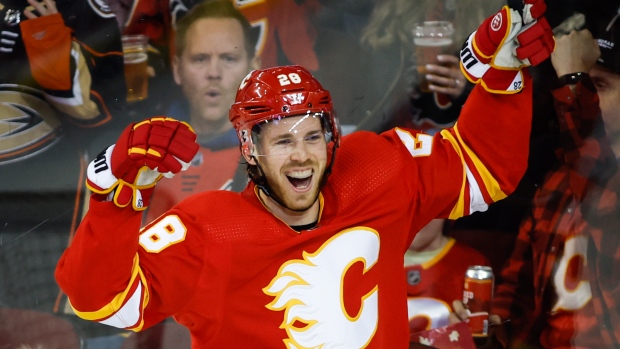 The Calgary Flames have won 10-straight games and look to set a pair of benchmarks Thursday against the Vancouver Canucks.

An 11th-consecutive win would be the longest in the NHL this season, breaking a tie with the Pittsburgh Penguins and Colorado Avalanche, who each had 10-game win streaks earlier this year.

A win tonight would also set the Flames’ record for longest win streak in franchise history. The Flames won 10 straight once during the 1978-79 season, while the franchise was in Atlanta, and again during the 2016-17 season.

Since the Flames’ last loss on Jan. 27, the team has trailed for just 37 minutes and 25 seconds, most of which (37:01) came during the second game of the streak against the Dallas Stars. The remaining 24 seconds came on Feb. 10 in a 5-2 win over the Toronto Maple Leafs.

Calgary has outscored its opponents 42-15 over the past 10 games and has not trailed in the past five. The penalty kill has played a large part in the Flames’ success, as the team has killed 24 of 25 penalties during the win streak.

Forward Elias Lindholm has been front and centre of the Flames’ offence during the streak, scoring in eight consecutive games, which is tied for the franchise record with Gary Roberts (1992-93) and Kent Nilsson (1983-84).

Lindholm can become the second player in NHL history to score in nine straight games, with his team winning each game. The first was Mario Lemieux, who scored in 11 straight games (Mar. 18 - Apr. 4) during the Pittsburgh Penguins’ 17-game win streak in the 1992-92 season.

The 27-year-old Lindholm has also scored the game-winning goal in each of the Flames’ past three contests and has the chance to become the third player in NHL history with a game-winner in four straight games. Newsy Lalonde (five straight with the Montreal Canadiens in 1920-21) and Daniel Alfredsson (four straight with the Ottawa Senators in 2006-07) are the only players to score game-winning goals in four consecutive games.

The Flames’ streak has catapulted them to first place in the Pacific Division (66 points) with a 30-13-6 record.