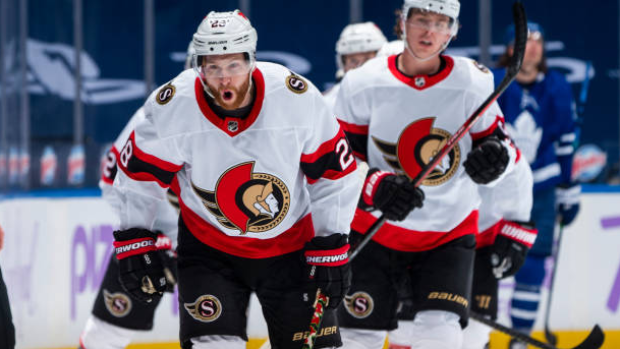 The Ottawa Senators have had a rough season. The team sits last in the North Division with 32 points in 43 games and are three points back of the sixth-place Vancouver Canucks despite having played six more games.

However, through a rebuilding year, the team has found ways to create excitement on the ice.

Going into Wednesday night's game, right-winger Connor Brown has scored in a franchise-record eight-consecutive games. He has joined Jason Spezza as the only Senators to have registered a goal in eight-consecutive appearances, as Spezza managed the feat between Dec. 12, 2009 and Feb. 4, 2010 with 20 games missed during the streak due to injury.

This is the second time this season the Senators have had a lengthy goal streak, as 22-year-old forward Drake Batherson had a six-game streak between Feb. 18 and March 1. At eight games, Brown's goal streak is the longest in the NHL this season, one more than Auston Matthews' seven-game streak and two longer than the six-game streaks of Batherson, Mark Scheifele, and Mikko Rantanen.

Below is a look at how Brown's streak compares with the longest in recent NHL history.

Now at 14 goals on the season. Brown has more than doubled his season-total over the length of this streak. More impressively, Brown has not scored in back-to-back games this season prior to the start of his record run, which has accounted for 11 per cent of his total career goals.

Since the start of the streak on March 25, the 27-year-old's eight markers trail only Matthews (11) for the most during that span and is tied with Mika Zibanejad, Alex Ovechkin, and Jason Robertson.

If Brown is able to score and extend the streak the nine games tonight against the Winnipeg Jets, he will tie Denis Savard, Steve Yzerman, Teemu Selanne, and Jaromir Jagr for the fourth-longest goal streak in the NHL since 1990-91.

What are the odds of Brown continuing his streak? The Toronto native has scored in each of his past two games against the Jets but was held off the score sheet in their first five meetings. But Brown has made it a point to put the puck on net over the duration of the streak, firing an average of 3.13 shots on net compared to 1.97 shots per game prior to March 25.

All eyes will be on Brown tonight as he looks to climb up the all-time list among the greatest players in league history.

Viewers in the Senators region can watch Brown go for nine-straight LIVE at 7 p.m. ET on TSN3/5.​