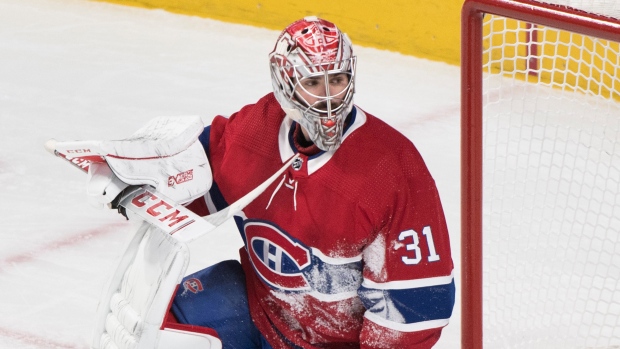 The Montreal Canadiens opened the season with a 7-4-2 record in October and started November 4-1-1.

Since beating the Washington Capitals on Nov. 15, a game where they also lost two key players in Jonathan Drouin and Paul Byron to long-term injuries, the Habs have been on an eight-game winless streak.

The Habs owned the NHL’s sixth-worst record in the month of November, with only the Detroit Red Wings, Buffalo Sabres, Anaheim Ducks, Nashville Predators and Vancouver Canucks doing worse.

Defensive struggles are at the root of the Habs’ recent woes. They’ve allowed 38 goals against during their eight-game skid. Their overall goals-against average sits at third-worst in the NHL at 3.52, with only the Red Wings (3.93) and New Jersey Devils (3.62) recording worse numbers. The Habs have let in 95 goals against already this season, which is the second-worst mark in the league. Only the Red Wings (118) have allowed more.

Though their 3 GA tonight were actually the 2nd fewest during their current 8-game losing skid, the slumping #Canadiens ugly 3rd period demonstrated defensive woes that have their 2019-20 total tied for 5th here pic.twitter.com/UQ0XzCrNvW

Goaltender Carey Price struggled mightily in the month of November. His stats have taken a hit, as he currently sits with a .898 save percentage and a 3.18 GAA on the year. In his last six starts, Price is 0-5-1 with a 4.90 GAA and .840 save percentage and was pulled once. He notably also struggled last November, when he recorded a .883 save percentage for the month before bouncing back to .916 in December.

Offensively, the Habs have scored 20 goals in the eight-game slide and are tied for 10th in the league in goals for average at 3.22. Their power play that was second-worst in the league in 2018-19 at 13.2 per cent has climbed to an improved 18.8 this season, good enough for 15th overall.

On the other side of the Habs’ special teams is the penalty kill, which has let the team down this season. Last year, the team had the 13th ranked penalty kill at 80.9. This season, the number has plummeted to 73.2 per cent, giving them the second-worst kill in the NHL behind only the Red Wings at 72.6 per cent.

The last time the Habs had an eight-game losing streak was back in December 2000 under then head coach Michel Therrien, a season where the team missed the playoffs. Coincidentally, the last time Montreal lost nine straight games was in current coach Claude Julien’s first stint with the club back in 2003, another year where they missed the postseason.

Despite leading for over 44 minutes of play at BOS tonight, the suddenly free-falling #Canadiens still dropped one in regulation. As this shows, their current 0-5-3 skid is one of the franchise's longest runs without a win on this list pic.twitter.com/0IraksSNnj

Despite sitting 21st overall in the NHL in points with 28, the Habs are only three points out of a division playoff spot in the Atlantic and four points out of a wild-card spot. However, the team missed the playoffs last season by only two points and if they miss the postseason for a third consecutive season, this winless streak will be even more scrutinized in April.