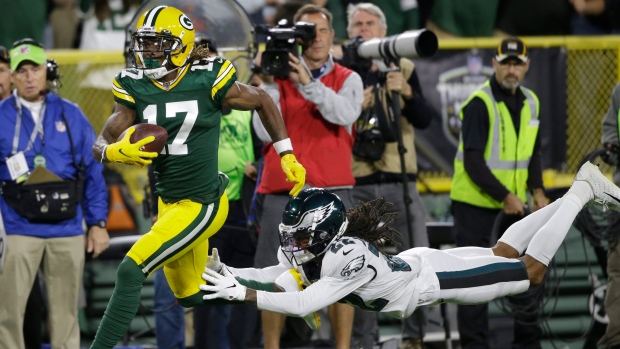 Fans have been treated to a number of outstanding individual performances and storylines at the wide receiver position this season in the National Football League.

DK Metcalf is on his way to becoming the next Megatron according to Philadelphia Eagles defensive coordinator Jim Schwartz in a compliment that backfired spectacularly.

Devante Adams said it’s fair to say he’s the best pass catcher in the league, and has backed up his boastful claim.

And DeAndre Hopkins contributed to Bill O’Brien’s firing in Houston by showing just how big a mistake it was to trade the wideout, to name a few.

With TSN’s NFL Analyst Jabari Greer breaking down his top five receivers in the league this season, TSN.ca looks at the numbers behind their impact on the football field.

1. Davante Adams, Green Bay Packers: The 27-year-old staked his claim as the league’s best receiver after Green Bay’s Week 9 win over the San Francisco 49ers. At the time Adams led the league with eight touchdown catches and was the first player to record three games of at least 10 receptions and 150 yards in the first half of the season, despite missing two games to injury.

Since that claim, Adams has kept pace with 21 receptions for 233 yards and three touchdowns in three games.

The Fresno State product is now tied for fifth in the league in receptions (74), 10th in yards (908), and tied for second in touchdowns (11), while being the only receiver among the league leaders whose games played are still in the single digits.

2. DK Metcalf, Seattle Seahawks: Schwartz’s ill-conceived comments to Metcalf ahead of their Week 12 meeting motivated the 22-year-old to 10 receptions and a career-high 177 yards, but that Monday Night Football performance was far from his only highlight this season.

Despite being just 18th in the league in receptions with 58, Metcalf leads the league with 1,039 yards and is fifth with nine touchdowns.

And while Schwartz insisted Metcalf isn’t Calvin Johnson yet, it’s worth noting Metcalf is outpacing the three-time All Pro and former Detroit Lions great through the first 27 games of their careers.

The trade was widely panned at the time and Hopkins has proven why all season long. The 28-year-old is third in receptions (77) and fourth in yards (967) this season. His four touchdowns with the Cardinals is the only stat slightly below the standard he set with in Houston, where he averaged 90 receptions, 1,229 yards, and eight touchdowns through seven seasons.

Johnson meanwhile has 103 carries for 408 yards and three touchdowns in eight games with the Texans and O’Brien has been out of work since early October.

4. Tyreek Hill, Kansas City Chiefs: You can question Hill’s eye for talent after admitting this week he had a less than favourable first impression of Patrick Mahomes, but you can’t question his production on the football field.

Hill is one of just two receivers to have already eclipsed the 1,000-yard mark with 1,021 through 11 games, and his 13 touchdowns lead all receivers. The playmaker has accomplished those feats in spite of his 68 receptions falling outside the top 10 at the position this season.

Hill has already surpassed his numbers from a season ago when he played 12 games and is on pace to exceed his All Pro numbers from 2018 (87 receptions, 1,479 yards, 12 touchdowns).

5. A.J. Brown, Tennessee Titans: While Derrick Henry and Ryan Tannehill have garnered most of the praise for the Titans dramatic improvement in play starting midway through last season, perhaps it should be a ‘Big Three’ in Tennessee.

Brown emerged as a top wide receiver in the second half of his rookie 2019 season – 703 of his 1,051 receiving yards and five of his eight touchdowns came in the final eight games last year – and he’s carried that momentum over to his sophomore campaign.

Brown has 40 receptions for 638 yards on the season and has already matched his eight touchdowns from his rookie season despite having missed two games to injury so far this year.