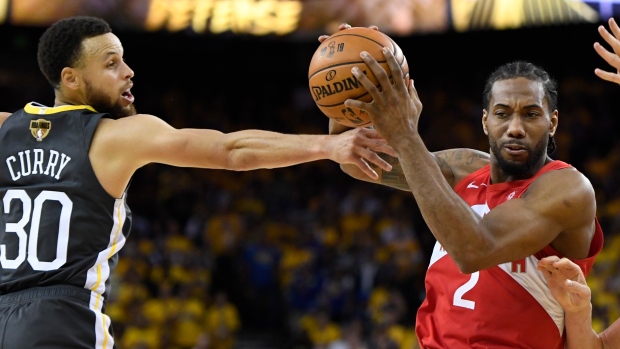 Toronto Raptors superstar Kawhi Leonard can make history in more ways than one Thursday night in Game 6 of the NBA Finals as Oracle Arena hosts its last basketball game.

Not only can Leonard help bring the NBA title to Canada for the first time with a victory against the two-time defending champion Golden State Warriors, but if he manages to put up 50 points, Leonard will break Michael Jordan's record for the most points scored in a single postseason.

Currently, Leonard sits fifth with 710 points, just 49 behind Jordan, who accomplished his feat in 1992 over a 22-game span.

Leonard's best point total this postseason came in Game 1 of their series against the Philadelphia 76ers, putting up 45 on 16-23 shooting. The 27-year-old is averaging 30.9 points, 9.2 rebounds and 4.0 assists this spring and is one of six players to put up 14 30-point games in a single postseason.

He will also look to become just the third player in history to win the NBA Finals MVP with two different teams joining LeBron James (Cleveland Cavaliers and Miami Heat) as well as Kareem Abdul-Jabbar (Milwaukee Bucks and Los Angeles Lakers). In addition, Kawhi can become the fourth player to win the award in his first season with a team, joining the likes of Magic Johnson, Moses Malone and Kevin Durant.

On the other side of the ball, the Warriors are hoping to close out Oracle Arena in winning fashion as they'll move to Chase Center in San Francisco next year. However, Golden State will have to do it against one of the few teams that have given them trouble in their home barn during their dynasty years.

Including the regular season, Toronto has beat Golden State all three times in Oakland in 2018-19, outscoring the Warriors by an average of 15 points all while shooting 48 per cent and 37 per cent from behind the arc. Under head coach Steve Kerr, who has been with Golden State since 2014, the Warriors had never lost three straight games to the same opponent at Oracle until the Raptors came storming in this season. Still, the Raptors will be in tough to get No. 4 as Kerr is 6-1 in elimination games, good enough for a winning percentage of .857 which is tied for the best in NBA history (minimum five games).

Of course, the major storyline coming out of Golden State's emotional win in Game 5 was Durant's Achilles injury. Durant is done for the playoffs and will likely miss a large portion of next season, meaning Curry will have to shoulder a lot of the workload to complete the comeback of the Raptors. Luckily for Golden State, the star point guard is more than capable. Per a 36 minute time frame this playoffs, Curry is averaging 31.1 points with Durant off the court compared to 21.1 points when they are playing together. He also attempting five more shots and four more three-pointers.

Furthermore, fellow Splash Brother Klay Thompson has been clutch in Game 6s during his impressive career with the Warriors. The 29-year-old scored 27 points with seven threes in Game 6 against the Houston Rockets earlier this postseason and scored 35 with nine three-pointers against the same Rockets team during Game 6 of the Western Conference Finals last season. Thompson's best Game 6 performance game in the 2016 conference finals against the Oklahoma City Thunder, scoring 41 points and a single-game postseason record 11 three-pointers.

With these numbers, it appears the Warriors have the edge over the Raptors in Game 6.