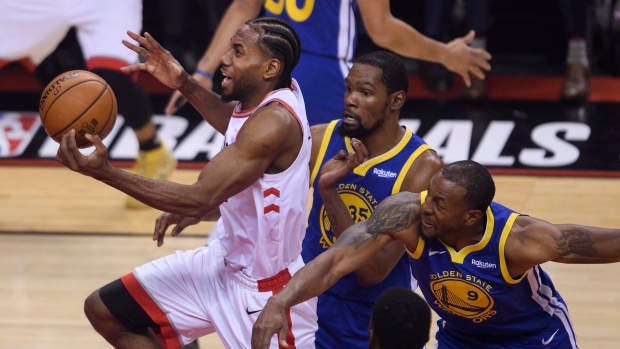 Kawhi Leonard was uncharacteristically quiet in Game 5 before catching fire in the fourth quarter and scoring 10 straight points for the Toronto Raptors, elevating himself to fifth all-time in points in a single postseason.

With his 26 points in the Raptors’ 106-105 loss on Monday, Leonard surpassed Hall of Famer Shaquille O'Neal's performance in 2000 with the Los Angeles Lakers to enter into the top five playoff scoring performances in NBA history.

The 27-year-old enters Game 6 trailing Allen Iverson's 2001 postseason performance by 13 points and Hakeem Olajuwon's 1995 playoffs with the Houston Rockets by 15 points. Leonard is averaging 30.9 points per game this postseason, though it's worth noting that both Iverson and Olajuwon accomplished their marks in 22 games, while Thursday's matchup will be Leonard's 24th game of these playoffs.

Should the Warriors manage to extend the NBA Finals to seven games, Leonard will likely be striking range of Michael Jordan's all-time record of 759 points in the 1992 playoffs with the Chicago Bulls.

Most Points in a Single Postseason

While Leonard is still chasing the all-time points mark, he sits alone in NBA history as the only player ever to record at least 700 points, 200 rebounds and 35 steals in a single postseason.

In Game 5, Leonard became third player in the last 35 years to have at least 25 points, 10 rebounds, five assists, two blocks and two steals in a potential series-clinching game in the NBA Finals, joining Dwyane Wade in 2006 and LeBron James in 2016. Wade and James both won when they accomplished the feat.

The Raptors had a chance to win Game 5 with the game's final possession down by one point. Many expected Leonard, who has made clutch shots throughout the postseason, but the Warriors made sure to shut him down. Instead, Kyle Lowry attempted a three-point shot for the win, but had it blocked by Draymond Green.

"Well, I mean, two guys came up on me, I don't know if I could have got a shot off," Leonard said. "It's hard. If you got two guys on top of you, you have to try to find the right play. We ended up getting a shot in the corner, but it just didn't go off quick enough."

Lowry dropped to 2-of-30 (6.7 per cent) on go-ahead field goal attempts in the final 20 seconds with Monday's blocked shot. He has the worst field goal percentage in those situations since he entered the league in 2007-08. Brandon Jennings has the second-worst conversion rate - among players with at least 20 attempts - at 3-for-29 (10.3 per cent).

Leonard, meanwhile, has the best field goal percentage in those situations in that time (45.8 per cent, 11-of-24).

On the Road Again

For just the third time in NBA Finals history, the road team has won four straight games in the series. The only other two series to have four straight road wins took place in 1990 (between the Detroit Pistons and Portland Trailblazers) and 1974 (Milwaukee Bucks vs. Boston Celtics) and both had the streak snap in after four games.

The Warriors, meanwhile, lost three straight games at home just once this year and held an overall 30-11 record at Oracle Arena during the regular season. They're 6-4 on home court this postseason.

The Raptors and Warriors both own two road wins in this series and either team could become just the seventh team ever to win three games in an NBA Finals away from home.

Most Road Wins in an NBA Finals