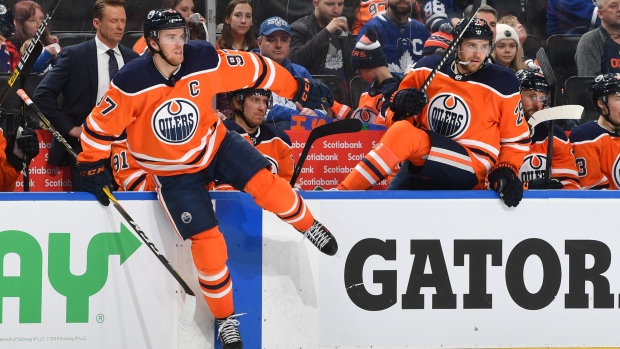 Edmonton Oilers superstar Connor McDavid has a goal and five assists in the two games since returning from his quad injury, pushing him right back into the NHL’s scoring race. McDavid’s 87 points on the season are only one behind David Pastrnak’s 88 for second and 12 behind teammate Leon Draisaitl’s 99 points for first.

“It’s great having him back," Oilers centre Ryan Nugent-Hopkins said after McDavid’s first game back in the lineup. "You see the plays he makes and he’s just so dangerous every time he touches the puck, and every team knows that. I mean, it’s no secret, and he still goes in and does it every night. For him to play like that in his first game back, it’s more than impressive.”

McDavid now has 19 games left in the season to surpass Boston Bruins winger Pastrnak and give the Oilers the top two scorers on the season. That should be ample time considering the teammates are first and second in average scoring, with Draisaitl putting up 1.57 points per game and McDavid scoring 1.53. Pastrnak is averaging 1.38 points per game and the Bruins have played one more game than the Oilers. McDavid is projected to record five more points than Pastrnak over the course of the remainder of the season.

Should the two finish first and second this season, it would be the first time teammates led the scoring race since the lockout-shortened 2012-13 season, when Martin St. Louis and Steven Stamkos of the Tampa Bay Lightning were tops with 60 and 57 points respectively in a 48-game, lockout-shortened season.

While Draisaitl and McDavid may be the most dynamic duo this season, they aren’t the only set of teammates featured prominently on the scoring list. Pastrnak, currently second with 88 points, is joined by Bruins teammate Brad Marchand in the Top 10, with Marchand sitting sixth with 79 points.

The Lightning also have two high scorers this season in the aforementioned Stamkos (14th with 66 points) now teamed up with Nikita Kucherov (10th with 76 points).

And if we're taking it one step further, it was the Pittsburgh Penguins two seasons ago that finished with three players – Sidney Crosby, Evgeni Malkin, and Phil Kessell – all finishing in the Top 10 in scoring.