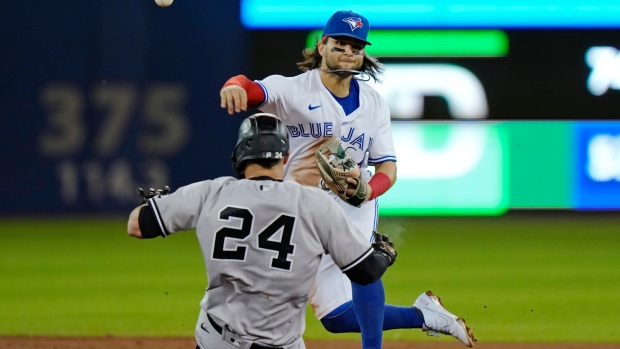 Just four days remain in the 2021 MLB regular season, and a lot is still to be decided in the American League wild-card race.

The Toronto Blue Jays picked up a huge win Wednesday night to stay one game back of the Boston Red Sox, while also keeping the New York Yankees within striking distance.

Also ahead of the Blue Jays are the Seattle Mariners, a team that got hot at the right time, picking up four straight victories and winning nine of their past 10.

Only two games separate all four teams. Let’s take a dive into the team’s schedules as they look to punch their tickets to the postseason.

The New York Yankees enter play on Thursday in control of their own destiny.

A win Thursday night would put them two games clear of the Blue Jays and one-and-a-half clear of the Mariners.

The Yankees get the added benefit of taking on a Tampa Bay Rays team that has already secured the No. 1 seed in the American League and could rest their starters down the stretch.

Like the Yankees, Boston enters play on Thursday in firm control of their postseason aspirations. Win and they’re in.

Boston holds a slight half-game lead over the Mariners and is a full game clear of the Blue Jays with just four to play.

Thursday night, the Red Sox will look to pick up their 14th win of the season over the Orioles before heading to Washington to take on the Nationals.

Boston has enjoyed playing the NL East this year and will enter their series with Washington 13-4 against the division in 2021.

Boston’s magic number to clinch a playoff spot is four.

Thursday: Not in action

One of the hottest teams in baseball will need to keep their momentum going this weekend if they want to make the playoffs.

The Mariners have lost just eight times in the month of September and face a familiar opponent this weekend as they look to make the playoffs for the first time since 2001.

Seattle has gone 10-6 in 2021 against the Angels and will not have to face Shohei Ohtani on the mound this weekend as it was announced the two-way star will not be making his scheduled start on Sunday.

Seattle’s magic number to clinch a playoff spot is five.

The Blue Jays enter the final stretch of the season needing some magic.

Toronto sits just one game back of the Red Sox but will need some help if they want to make the postseason for the second time in two seasons.

Toronto currently trails the Yankees by two games, but a win Thursday night would cut that number in half.

Toronto will host Baltimore this weekend and will likely need a sweep.

The Jays have enjoyed success against the Orioles this season, winning 68 per cent of their games against them (11-5) and outscoring them by 50 runs in 16 games.

If Toronto can win out, they will finish the season 92-70 and will need one added loss from the Yankees or Red Sox to at least force a tiebreaker.

Toronto’s magic number to clinch a playoff spot is six.