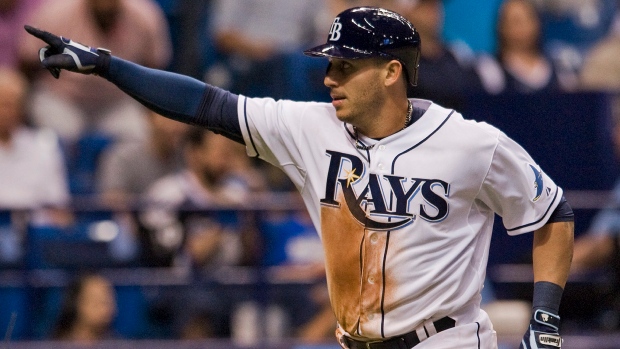 Cabrera got his 1,000th hit during a two-run second inning, and the Tampa Bay Rays rebounded again from an early deficit to beat the New York Yankees 3-2 on Wednesday night.

Tampa Bay went up 3-2 in the second when Cabrera drove in a run on a double off Adam Warren (2-2) and scored on Joey Butler's single.

The Yankees took a 2-0 lead for the second straight game in the first inning on RBI singles by Mark Teixeira and Brian McCann. The Rays scored twice in both the seventh and eighth Tuesday night to beat New York 4-2.

"Deja Vu," Cash said. "Don't know if many people would have predicted it."

Tampa Bay pulled to 2-1 in the first inning Wednesday on a homer by Steven Souza Jr.

Nathan Karns (2-2) gave up two runs and seven hits in five innings. Brad Boxberger, the fourth Tampa Bay reliever, pitched the ninth for his 10th save.

The Rays have held the opposition to two or fewer runs in 18 games, most in the majors.

Warren allowed three runs and seven hits in seven innings. Andrew Miller struck out all three batters he faced in the eighth, and has 29 strikeouts over 16 2-3 scoreless innings.

Karns started the game by throwing nine consecutive balls, including walks to Jacoby Ellsbury and Brett Gardner. Karns worked out of a two-on, one-out jam in the second by striking out Gardner and getting a grounder from Alex Rodriguez, who also fanned for the final out.

Rays centre fielder Kevin Kiermaier threw out Teixeira, who tried to score from second on Carlos Beltran's single, to end the fifth. Kiermaier said he moved up a couple of steps during the at-bat, which made a big difference.

The Yankees challenged under the plate-blocking rules, but the out call was confirmed.

"I guess the rule says you've got to give the runner a lane and I was hoping maybe we could steal one," Teixeira said. "I mean, I was out. It didn't work."

The announced crowd was 11,924, the largest in the first three games of a four-game series. Tuesday's turnout of 10,417 was the smallest for a Rays home game against the Yankees.

Rays: CF Desmond Jennings, out since April 26 with left knee soreness, has started jogging but doesn't know when he will return.

Three Charlotte pitchers combined on a one-hitter in the second game.

The Rays claimed RHP Preston Guilmet off waivers from Toronto and sent him to Triple-A Durham.