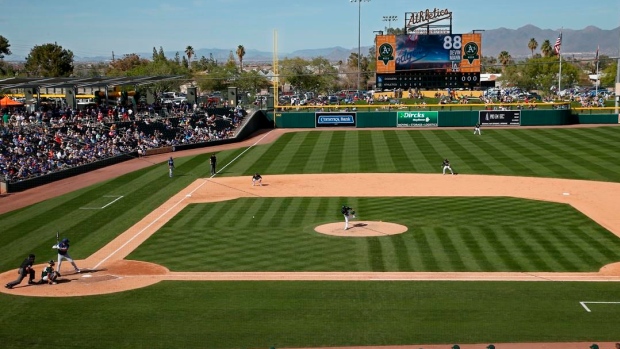 The Cactus League and Arizona community leaders have asked Major League Baseball to delay the start of spring training due to coronavirus concerns just over three weeks before pitchers and catchers are supposed to report.

The Cactus League made the request in a letter to Baseball Commissioner Rob Manfred obtained by The Associated Press on Monday. The letter was co-signed by the mayors of Mesa, Scottsdale, Surprise, Glendale, Goodyear and Peoria, as well as representatives from Phoenix and the Salt River Pima-Maricopa Indian Community.

MLB said in a statement that it "will continue to consult with public health authorities, medical experts, and the players' association whether any schedule modifications to the announced start of spring training and the championship season should be made in light of the current COVID-19 environment to ensure the safety of the players, coaches, umpires, MLB employees and other game day personnel in a sport that plays every day.”

Arizona is averaging just under 7,000 new coronavirus cases per day, but the Cactus League cited data in its letter from the University of Washington's Institute of Health Metrics and Evaluation projecting a sharp decline in infections by mid-March, down to as few as 3,072 daily. Spring camps are set to open the week of Feb. 15, with the regular season set to start on April 1.

Despite the roiling case numbers, the NHL's Arizona Coyotes are hosting 3,450 fans for home games in Glendale, while the NBA's Phoenix Suns are playing without fans. High school sports are also still operating. The Cactus League hosts 15 MLB clubs.

In a sign that other teams are moving forward with preseason plans, the spring training home in Jupiter, Florida, shared by the St. Louis Cardinals and Miami Marlins announced Monday it will begin selling tickets for spring games beginning Feb. 1. Roger Dean Chevrolet Stadium said 2021 tickets will be sold in seating pods of two, four or six spaced six feet apart throughout the stadium.

Any changes to the major league schedule are subject to agreement with the players' association per terms of their collective bargaining agreement. A person familiar with talks between the sides said MLB asked the union in November about moving back opening day a month to create a safer playing environment, possibly spurred by the availability of vaccines.

Talks stalled there, and no formal proposals about altering opening day have been exchanged.

The person spoke to the AP on condition of anonymity Monday because the discussions were considered private.

“The letter correctly notes that MLB does not have the ability to unilaterally make this decision,” the players' association said in a statement. “While we, of course, share the goals of a safe spring training and regular season, MLB has repeatedly assured us that it has instructed its teams to be prepared for an on time start to spring training and the regular season and we continue to devote all our efforts to making sure that that takes place as safely as possible.”

While the league was able to impose a shortened 60-game regular season in 2020 per the terms of an agreement with the union signed in March, it doesn't have the authority to unilaterally adjust the 2021 season under the current collective bargaining agreement.

The person also confirmed that the union turned down a December offer from the league that included a permanent adoption of an expanded post-season and the universal designated hitter — changes instituted temporarily in 2020.

In the negotiations — first reported by The Athletic on Monday — the league also asked for a variety of on-field changes, including use of a pitch clock and an automated strike zone in spring training. In exchange, it offered to resolve two service-time grievances from last season in the union's favour and boost the players' guaranteed post-season share from $50 million last season to more than $80 million, roughly what the players got in 2019.

The union declined the proposal because it is opposed to expanding the post-season, fearing it will disincentivize teams from pursuing free agents.