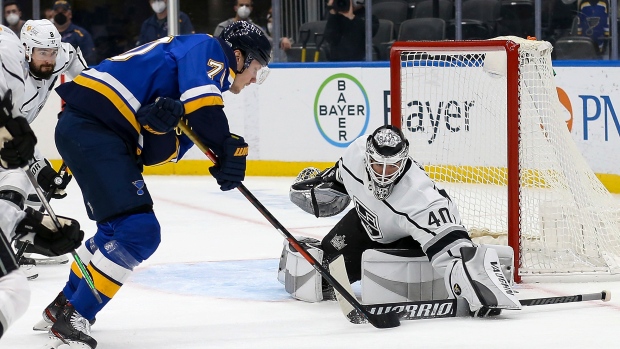 ST. LOUIS — Alex Iafallo and Andreas Athanasiou scored in the second period to send the Los Angeles Kings past the St. Louis Blues 2-1 on Wednesday night for their sixth consecutive victory.

Cal Petersen made 35 saves, improving to 3-0-1 in his last four starts.

“Our goaltender made some big saves for us,” Kings coach Todd McLellan said. “I don’t think we had a real good game from the get-go tonight, to tell you the truth. We just weren’t good with the puck. I didn’t think we were near as sharp with the puck as we were two nights ago. Some of that has to do with how St. Louis played.”

Oskar Sundqvist scored late in the third for the Blues, who fell to 1-5-1 in their last seven home games.

Iafallo put Los Angeles ahead at 10:24 of the second. St. Louis goalie Jordan Binnington couldn’t corral a shot by Dustin Brown, and Iafallo took advantage by knocking in the rebound.

The Kings made it 2-0 at 16:08 when Athanasiou scored on a wrist shot, beating Binnington to his glove side.

Binnington made his fifth consecutive start and sixth in the team’s last seven games. He stopped 19 shots in falling to 8-6-2.

St. Louis was unable to score with a 6-on-5 skating advantage for 3:25 on a delayed penalty in the third.

“We’re not getting rewarded for some of the work that we’re doing, but we can do a little bit more and get some puck luck,” Blues defenceman Torey Krug said. “We’ve got to earn it right now. We’ve just got to get a little greasier around the net and make it harder for their defencemen and their goalies.”

Sundqvist did score on the ensuing power play at 18:14 and that snapped a 139:33 scoreless streak that dated back to the second period of Saturday's game against San Jose.

“You could see it was frustrating,” Blues centre Ryan O'Reilly said. “We couldn’t crack them until late. It’s a tough one.”

The Kings showed their mettle during the delayed penalty, Petersen said.

“Obviously, it’s pretty unique. I think the whole time, we expected the other team to mess up,” he explained. “They did a good job. I think we did a better job of staying in our structure. We kind of held on for dear life. It didn’t feel really too chaotic despite the long time for it.”

St. Louis D Carl Gunnarsson will miss the rest of the season with a right knee injury. He is the fifth Blues player on injured reserve. Gunnarsson got hurt Monday in a puck battle with Kings forward Gabriel Vilardi along the boards behind the net. ... Ivan Barbashev had surgery on his left ankle and will be re-evaluated in six weeks. ... The Blues remain without F Jaden Schwartz (lower body) and D Colton Parayko (back). This was the sixth game Schwartz has missed and the fourth for Parayko. ... Kings forward Jaret Anderson-Dolan (upper body) was placed on injured reserve, retroactive to Feb. 18. ... Kings D Mikey Anderson was a late scratch due to a lower-body injury.

Blues C Tyler Bozak, who hasn’t played since taking a big hit from Mark Stone on Jan. 26, did not skate Wednesday morning. After skating the past two days, Bozak is “not feeling ready yet," according to Berube. ... RW Vladimir Tarasenko (shoulder) was on the ice for the fifth consecutive day at the morning skate. Taraskenko is recovering from surgery he had five months ago on his left shoulder, his third operation on the shoulder and second since Oct. 27, 2019.