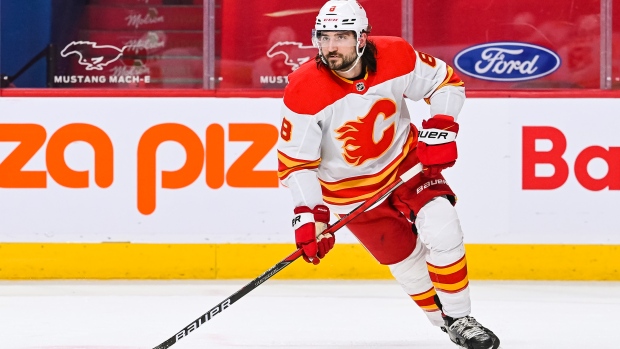 Part two of our Seven Questions series heads to Calgary and an organization that’s been running on the treadmill of mediocrity for some time now – not nearly good enough to compete for the Stanley Cup, but talented enough to steadily hunt postseason berths.

It’s clear 2021-22 will be a pivotal season for the Flames’ core, if not because of the under-performance from a season ago, then because of pressure from the salary cap.

Players the calibre of Matthew Tkachuk and Johnny Gaudreau will see contracts expire at the end of next season, and such an investment would signal a belief in the core pieces of this roster to get over the proverbial hump.

What’s particularly fascinating about this pressure cooker of a season ahead is the fact that this group is going to have to get over the hump without face of the franchise Mark Giordano, the former captain having been selected by the Seattle Kraken in the expansion draft.

The loss of Giordano (and the prior loss of T.J. Brodie to the Maple Leafs in unrestricted free agency) stripped the Flames of one of their team strengths, a reliable first pairing that could be deployed against every level of competition.

Thus, our Calgary question is very simple: Is the Flames’ defence good enough to get this team into the postseason once more?

Let’s start with the expected Flames depth chart on the back end for the approaching year, and their respective contributions – measured by Goals Above Replacement – over the past couple of seasons:

On the plus side of things, the Flames do have depth heading into next season, but some of that will be contingent on taking care of a bunch of restricted free agents. Nikita Zadorov, Oliver Kylington, Juuso Valimaki (10.2), and Connor Mackey are all in need of new deals this summer.

Zadorov is the biggest name of the group, his rights acquired from the Chicago Blackhawks last week for a third-round pick. Assuming Zadorov is extended, it’s likely he – along with Noah Hanifin, Rasmus Andersson, and Chris Tanev – will be playing a bulk of those top-four minutes against difficult competition.

Andersson is perhaps the most interesting; his sterling results two years ago transitioned him from depth option to reliable top-four option (playing more than 21 minutes a night), but with most of those minutes anchored to Giordano. Hanifin and Tanev were another regular top-four pairing last season and we should expect that trend to continue into next season.

Zadorov is more of a question mark. It seems likely he’ll be used in more of a shutdown-type of role, but if the Tanev-Hanifin pairing is sacred, the look and feel of Andersson’s next partner will be quite different.

That matters a great deal. It is true the Flames have depth. It is also true that their performance has been exceptionally dictated by the strength of the Giordano pairing (and the respective top-six forwards in front) driving scoring and winning games.

Over a three-year horizon, spanning significant minutes with both Brodie and Andersson, the Giordano pairing dominated at even strength. The rest of the group (a group, I point out, that included most of the other names in the defensive pool) fell underwater by the end of the 2020-21 season: 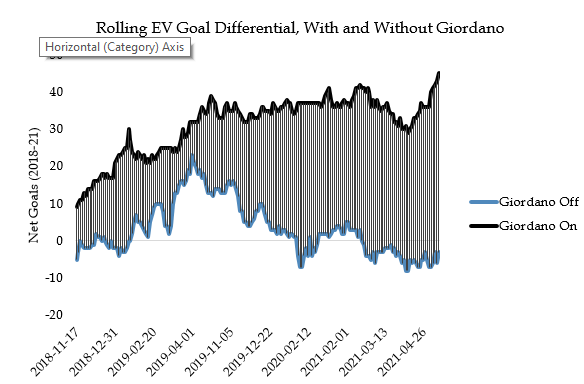 The Flames had to move on from Giordano at some point – 37-year-old defenders are already defying the aging curve in extraordinary fashion. But Calgary’s bet here is that Andersson was a part of the reason why their top pairing was so effective last year in transitioning the puck and sustaining pressure in the offensive zone; in other words, it wasn’t Giordano taking Andersson along for the ride.

Andersson looks like a promising player – he’s still just 24 and has started to show a bit of a scoring touch in the past couple of seasons as well. But there are reasons to be bearish about the effectiveness of this pairing going forward. If we look at the last couple of seasons in which Giordano and Andersson played together, then isolate their performance when separated from one another, Giordano’s presence is palpable:

Even if you discount the goal numbers (the Flames were outscored 53 to 36 with the Giordano and Andersson pairing on, an .878 save percentage at issue here), it’s clear Giordano was driving the bus. That was true on two fronts: Giordano’s performance dramatically increased when moved away from Andersson, and Calgary’s team performance suffered whenever Giordano was taking a breather.

I attribute much of this to Giordano’s breakout and transition abilities as both a skater and passer; the Flames​' forecheck, which is quite good when it’s on its game, can recover pucks and drive offence to the heart of the net.

That’s what made Giordano so valuable for so many years in Calgary. His ability to take the defensive burden and zone exit responsibilities off the forward group (and in some cases, even off his partner) unlocked a lot of what Calgary wanted to do in the transition. Giordano isn’t being replaced by another form of Giordano – he’s being replaced by a number of internal (and up until now, lesser) options and a defensive defenceman in Zadorov.

This is a talented group. But it is reasonable to wonder if they will take a step back in Giordano’s absence, and what that might mean for roster-building strategies over the long term.

Another losing season in Calgary may drive calls for more change. But a season where Calgary’s younger core of defenders step up and deliver could make Giordano but a memory and give Treliving the ammunition he needs to continue adding talent around this core group.