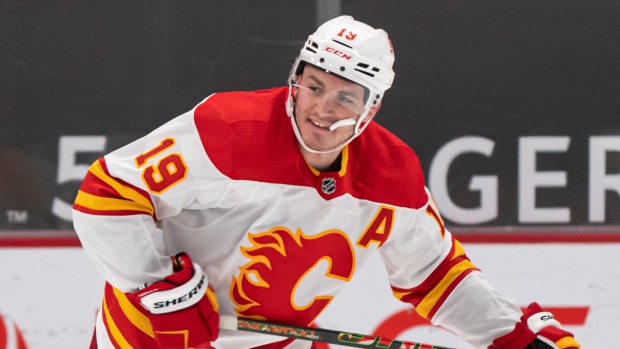 On Saturday afternoon, Calgary Flames forward Matthew Tkachuk took to the podium and delivered an emphatic message ahead of the second half of a back-to-back against the Edmonton Oilers and a road trip that could make or break their season.

Tkachuk, who has been far less noticeable and engaged than most would have expected this season (and would be on pace for just 50 points in an 82-game season), admirably fielded questions and took ownership for his and the team’s play to date that had seen them skate to a .500 record a quarter of the way through the year.

“This is a huge, huge moment in our season, this game tonight,” he said.

Ten hours later, Tkachuk was back at that very same podium, reflecting on the Flames’ 7-1 defeat at the hands of Connor McDavid and the Oilers, one of the worst losses to their provincial rivals in franchise history.

“That sucked,” he said. “Let’s call a spade a spade here. That was probably one of the toughest moments since I’ve been here, just the way it went and the way things are going…My one thought is that I feel terrible for our goalies, really. They come in and battle every practice and every game and if it wasn’t for them right now, who knows where we’d be in the standings.”

This season in Calgary was supposed to be different.

They finally had their goalie in Jacob Markstrom. They toughened up their blueline with Chris Tanev. They brought in wingers Dominik Simon and Josh Leivo to compete for top-six spots. Johnny Gaudreau, Sean Monahan and Mark Giordano talked about their experience in the NHL bubble, coming a handful of saves short of defeating the eventual Stanley Cup finalist Dallas Stars and building off that momentum. On paper, the Flames looked like one of the deepest teams in the North Division.

While Markstrom and Tanev have exceeded expectations, the Flames continue to show flaws that have dogged this current core group of players, flaws that could sink the team’s playoff chances before the halfway point of the season: They don’t compete enough. They lack a killer instinct. They don’t hate to lose enough. They are tough to coach.

Already this season, there’s been at least one players-only meeting (held just six games into the season) and a player’s trade request (Sam Bennett) became public, bringing with it drama and questions about his ice time on a seemingly weekly basis.

There’s also the troubling trend of flat starts (the team’s first-period goal differential of -10 is second-worst in the league, only ahead of Ottawa). There’s the lack of emotional pushback when trailing games, which they have done more than all but four teams.

There was the third period against Vancouver on Feb. 13 where they had just seven shots despite needing a goal. On Saturday night, after falling behind 6-1 in the second period, the team mustered just two shots combined on two power plays in the second period and had several defensive breakdowns throughout the game.

“It doesn’t take talent to play away from the puck, it just takes desire,” head coach Geoff Ward said after the loss to Edmonton on Saturday.

It’s one of several lines Ward (and previous head coaches Bob Harley and Glen Gulutzan and Bill Peters, as well as several players) have used when describing the poor habits in this group dating back years, habits that seem to have perpetuated even more this season.

In his Saturday afternoon Zoom call before the game against the Oilers, Tkachuk stressed the importance of the team’s upcoming road trip that will see them play the Toronto Maple Leafs twice and then the Ottawa Senators three times.

“Realistically, it’s a make-or-break road trip for our team the way things are going, and not a whole lot of games left,” he said. “You get behind the eight ball it’s hard to make up ground with less than 40 games left.”

The week ahead may have even more significance than that.

Much of the talk coming into this season was that this was The Last Dance of sorts for this current core of Calgary Flames players that includes Tkachuk, captain Giordano and forwards Monahan, Gaudreau, and Mikael Backlund.

The Flames’ upcoming trek (and everything at stake with it) may force general manager Brad Treliving to honestly assess the team and organization’s DNA, perhaps a few months earlier than he would have liked.

They’ve had four coaches in six years and zero playoff series wins to show for it. The innate flaws this group possesses clearly haven’t been rectified. Players have been shuttled in and out and yet much remains unchanged.

As the saying goes, “The definition of insanity is doing the same thing over and over and expecting different results.”

The next week for the Calgary Flames could ultimately define the organization for far longer than that.