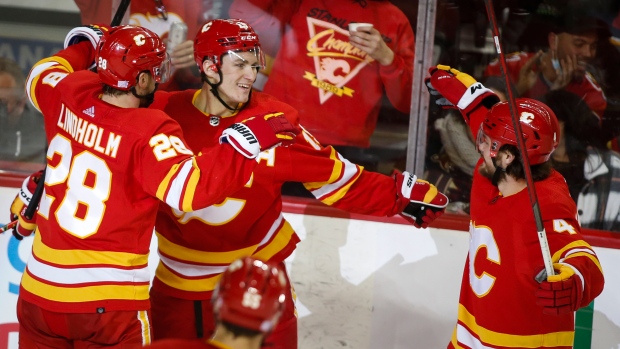 CALGARY — On a night Calgary didn't have its 'A' game, Milan Lucic and the club's veteran fourth line delivered a pair of timely goals.

Lucic scored a key one early and Trevor Lewis added an empty netter as the Flames took a 5-2 victory over the Chicago Blackhawks on Tuesday.

With the score tied at 2-2, Matthew Tkachuk scored the game-winner on a fortuitous bounce at the 14:25 mark of the third period when his centring pass angled off the skate of Chicago defenceman Seth Jones and went over the shoulder of goaltender Marc-Andre Fleury.

The Blackhawks pulled Fleury with less than two minutes to go, but before they could mount a push for the equalizer, Lewis' goal found the back of the net with Lucic escorting it the entire way.

“That's a really good line for us,” said Flames coach Darryl Sutter, who had Lewis and Richardson as players when he won the Stanley Cup with the Los Angeles Kings. “They check and score and play the right way. They thrive on winning and in that case, that's why their experience is shining through with guys like that because they know what it takes to win.”

The Flames have won four straight, have points in seven straight, and sit alone in first in the Western Conference.

“Got us momentum back right away when we needed it and just throughout the night, very solid for us,” Tkachuk said of the battle-tested trio. “People don't realize how big those goals are when we have a chance to put a team away.”

Dillon Dube and Johnny Gaudreau, also into an empty net, rounded out the scoring for Calgary (12-3-5).

Reese Johnson had a goal and an assist — his first two NHL points — to lead the offence for Chicago (6-11-2). Brandon Hagel also scored.

"It's obviously nice to contribute,” Johnson said. “I want to be able to do that more, get some greasy ones in front of the net, but obviously we want to come out of that with two points."

Jacob Markstrom, who improved to 8-3-4, had 19 saves for the Flames, including a series of clutch stops in the second period to keep the game tied.

After giving up two goals on the first six shots, Fleury slammed the door until late in the third. He finished with 34 stops and fell to 5-8-0.

“When he starts seeing pucks and we start giving up too many chances, he gets better and better,” said Chicago captain Jonathan Toews. “He backs us up when we're not so good in front of him. We don't want to have to rely on him to do that every single night. We have to help him and do things better in front of him.”

After a hectic stretch of nine games in 15 days — including a seven-game Eastern road trip — Calgary has three days to recharge before playing host to the Winnipeg Jets on Saturday.

“Probably the toughest stretch of our schedule,” said Lucic. “Starting in Calgary, ending in Calgary, so it just felt like one big long road trip, but I think we did a good job of managing our energy, managing our rest. Being fresh in all nine games.”

“The consistency of playing a certain way is not there yet, but it's getting there,” said Chicago interim coach Derek King. “I know these guys, going in there after the game they were disappointed. As the season has gone so far, that's a positive that they are upset about it."

NOTES: It was Calgary's first win against a Western Conference opponent (1-2-3). … Johnson's goal was the first that the Flames' top line of Lindholm, Gaudreau and Tkachuk have surrendered at five-on-five all season. … Calgary improves to 12-1-3 when scoring first while the Blackhawks fall to 0-9-1 when falling behind 1-0. … Toews has yet to score in 19 games. Having sat out last season, his last goal was on March 5, 2020.