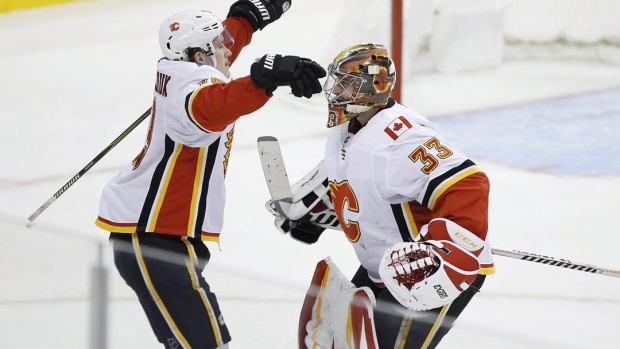 CALGARY — Instead of a celebratory pat, tap or fist bump after a win, Calgary Flames forward Matthew Tkachuk and goaltender David Rittich have been taking celebration to another level.

Theirs is a jumping, enveloping, jiggling bear hug that has taken on a life of its own given that the Flames have been winning a lot with Rittich in net.

"I normally give the goalies a big hug after games and Ritter started giving me the hug back and lifting me up a little bit," Tkachuk explained. "It's transformed into now me jumping into him and him grabbing me.

"He puts it all on the line for us, so I'm surprised he has that actual bit of energy to lift me up and hold me, but he does it after every game so it's good."

Said Rittich: "He's a pretty light guy, so it's fine."

Rituals come and go in sport, as athletes and teams embrace them on winning streaks and discard them when the losses come.

So is it now a superstition? Or does Tkachuk really want to hug his goalie so dramatically?

But the 21-year-old forward believes Rittich deserves a grateful squeeze for contributions in what so far has been one of Calgary's best seasons since winning the 1989 Stanley Cup.

Rittich has guarded the net for 20 for Calgary's 34 wins.

The undrafted 26-year-old Czech spent the majority of his first two seasons in North America with Calgary's AHL affiliate in Stockton, Calif.

The Flames felt bullish enough about his backup abilities in 2017-18 to trade Eddie Lack mid-season and keep Rittich as a No. 2 behind Mike Smith. Rittich posted an 8-6-3 record.

Re-signed by Calgary last summer to a one-year contract worth US$800,000, Rittich has been the surprise of the Flames season. He doesn't refute that label.

"I will take it as a compliment for sure," Rittich said. "Nobody was probably thinking I could play these games that I've played and I'm at 20 wins right now."

Rittich has edged ahead of the veteran Smith in starts with 15 in Calgary's last 22 games, and a 10-2-3 record in that span.

Calgary also hasn't lost a home game in regulation this season when the six-foot-three, 209-pounder has started.

A high-scoring offence and a team that holds the opposition to just under 30 shots per game can make life easier for a goalie.

But Rittich has had to live up to his "Big Save Dave" nickname to pull out wins in some uneven efforts by the Flames.

"It's about hard work in practice and being mentally prepared for everything that can happen in the game." Rittich said.

"You never know what's going to happen, the bounces off the walls that can happen in a game, and you have to be prepared for it."

With Calgary setting up for home-ice advantage in the playoffs and March chock full of home games, the spotlight on Rittich is likely to intensify.