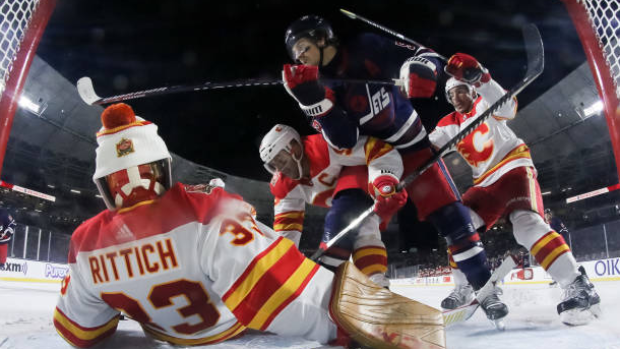 CALGARY — The Calgary Flames' first opponent if and when the NHL resumes is a team they saw once this season outside.

The Winnipeg Jets edged the Flames 2-1 in overtime Oct. 26 in the Heritage Classic outdoor game in Regina.

The NHL halting the regular season March 12 because of the COVID-19 pandemic meant the Jets didn't travel to Calgary two days later and again March 31.

But the league's relaunch plan pits the prairie-province clubs against each other in a best-of-five "play-in" round which would determine the 16 playoff teams.

Having potentially two months to prepare for an NHL opponent is unique.

"I don't think we want to focus on Winnipeg so, so much that we're frozen by it," Flames head coach Geoff Ward said Wednesday during a conference call.

"We'll do our due diligence on Winnipeg. We know who the opponent is now, but the most important thing we're thinking about is how we're going to prepare our team to play Winnipeg."

When the NHL hit pause, Calgary (36-27-7) ranked third in Pacific Division four points back of the second-place Edmonton Oilers.

The Jets (37-32-8) were fourth in the Central and held down the first wild-card berth in the Western Conference.

"I think playing them late in the season would have probably been an advantage to both teams in terms of preparation," Ward said.

"Obviously now we get to study Winnipeg a little bit more because we know they are our opponent. The most important thing for us is what are we going to do, let's get to our game and what does that involve?

"How do we prepare ourselves the best to come out of the break and be playing our best hockey, when that first puck drops?"

Both Calgary and Winnipeg were eliminated in the first round of playoffs in 2019.

The Jets reached the Western Conference final in 2018 before bowing out to the Vegas Golden Knights.

The NHL going to conference matchups instead of divisional may have negated an early Battle of Alberta in the relaunch, although the league has yet to announce how playoff teams will be seeded.

The Flames could end up playing the Jets in Edmonton because the provincial capital is a candidate city for the NHL's hub-city concept to complete the playoffs.

"It'll be a lot less travel to get there," Flames captain Mark Giordano acknowledged.

"We're all expecting to have no fans in the building, so I don't think it will be too much of an advantage either way.

"The big thing for us is how the seeding works. Home-ice advantage is still an advantage obviously for last (line) change and stuff like that."

Ward, who took over as Calgary's interim head coach in November when Bill Peters resigned, has some experience coaching an NHL team that wants to hit the ground running.

He was an assistant coach of the Boston Bruins during the lockout season of 2012-2013. The NHL didn't resume until Jan. 6.

"There certainly are some parallels and some things you can draw on there," Ward said.

"We need to understand there is a little of urgency coming out of this one just in terms of the first one being a best-of-five, just in terms of how long the players are going to have been off without really being able to skate."