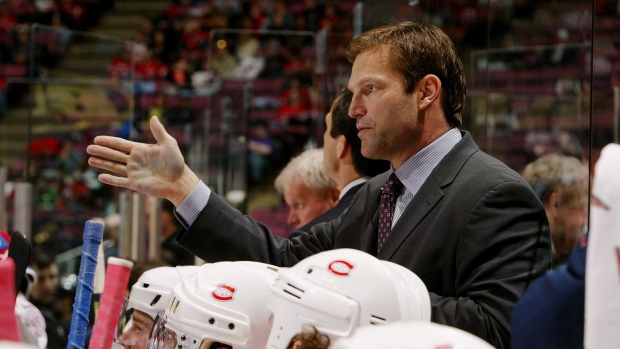 Everyone’s role, regardless of position or place on the depth chart, is important in the quest for a common goal.

“All the players have to be a part of it and have the same vision,” he said on Monday.

Muller, who recorded 959 points in 1,349 games over 19 seasons and won a Stanley Cup as a member of the 1993 Montreal Canadiens, will oversee the Flames’ forwards and power play after getting hired last week. The Flames also promoted AHL head coach Cail MacLean to the staff and reassigned assistant coaches Ray Edwards and Martin Gelinas to player development roles.

Muller was behind the bench with the Canadiens in two stints before getting fired along with head coach Claude Julien earlier this season. He was the head coach of the Carolina Hurricanes from 2011 to 2014. In Calgary, which has had five head coaches under general manager Brad Treliving since 2014, he brings a fresh voice to a group that drastically underperformed last season and missed the playoffs.

“You’ve got to get everyone engaged and excited with what they bring to the table and how that helps a team win hockey games,” the 55-year-old Muller said.

Expectations – and how they are communicated – are key.

“That’s great to say, but I think there has to be a bunch of pillars in there to give you the opportunity to win a Cup. So you’ve really got to get everyone engaged in feeling a part of it.”

Muller came aboard after Flames head coach Darryl Sutter suggested that he wanted a voice behind the bench that had previously been a head coach in the league. The general manager talked with people who knew Muller, including players who he had coached.

“Before you go out and fill a position, you build a profile of what you want,” Treliving said. “Things like what characteristics you want that person to have, their background, personality, all those types of things.”

The Flames cast a wide net before tabbing Muller, a native of Kingston, Ont.

Sutter and Muller see the game in a similar way.

“The style of play, they’re aligned on that,” Treliving said.

“Play with the puck, without the puck. In today’s game, you need to have a strong staff and it’s not just the head coach. He’s got game plans and 20 players to worry about, so you need a strong staff around him.”

The Flames have developed individual areas for each player to improve. Muller will work individually with players on specified instruction, be it winning puck battles in the corners, improving on faceoffs, reading plays as they develop, or other skills.

“He’s a guy who has been through it all as a player and has a real good personality,” Treliving said.

“He really connects with players.”

This is the first major move since the Flames’ season came to a premature end in April. It’s expected to be an off-season of player movement in Calgary after the team’s core again failed to have any success in reaching the postseason.

“We’ve got a long list,” Treliving said. “We’ve got to make our team better, whether that be on the ice or off the ice. We like what we’ve done with our coaching staff so that’s one piece of business out of the way.”

So is Treliving watching the Stanley Cup playoffs final four right now and thinking the Flames could be in that conversation a year from now? The Montreal Canadiens were the last team to qualify and have made it to the third round, as have the New York Islanders – a group without star power beyond Mathew Barzal but possessing a strong identity.

“The bottom line is the league is really close,” he said.

“Nobody really wants to admit that, but the margin for error is tight. If you look at some of these series, there are some that have been sweeps that could easily have been the other team. They are paper-thin margins. Certainly when you look at teams, every year it’s the same. And you’ve got to be careful that you’re not just chasing the flavour of the day, but certainly you can look at the final four teams that are standing and there are some characteristics.”

It’s a group the Calgary Flames have aspired to join since their Stanley Cup run in 2004.

And hiring Kirk Muller is their latest attempt at getting there.