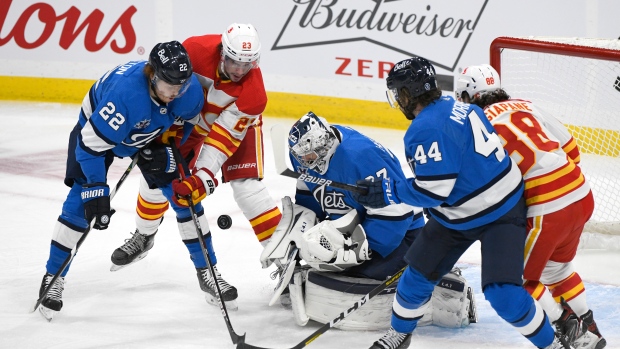 Convened just six games into the season, it was humorously dubbed as “the earliest players-only meeting in NHL history.”

After three straight losses – two to the Toronto Maple Leafs and one to the Montreal Canadiens – and getting called out by veteran forward Sean Monahan for their “lack of emotion” (words that have followed this group of Calgary Flames for the past couple of years), Flames players held what Seinfeld character Frank Costanza would refer to as the “airing of grievances” a week ago.

Since then, the team has pulled off a pedestrian 2-2 record. After playing their best game of the season in the first game immediately following that meeting, a 2-0 shutdown of the Montreal Canadiens, where they had 23 hits and 22 blocked shots, Calgary has reverted back to their old ways – taking periods off, falling behind early in games, and being too easy to play against.

Indeed, after their latest loss on Thursday night, 4-1 to the Winnipeg Jets, two nights after a 3-2 defeat to the Jets, head coach Geoff Ward referred to those meetings as a “tape job” in how temporary their impact can be.

“They last for about 15 minutes,” he said. “We got the immediate response in the hockey game against Montreal. We won the game.”

After shutting out the Canadiens Saturday, the Flames went on to beat the Jets 4-3 in a shootout Monday before it all unravelled the following night.

When assessing the team’s latest loss, Ward again referred to compete level and not allowing opponents to dictate the pace of the game.

“Right now, we’re soft in a lot of areas of the hockey game,” he said.

His players have voiced similar concerns.

Rasmus Andersson, who has taken on a bigger role this year as a top-pairing blueliner and quarterback of the first power-play unit, said that the team doesn’t play together as a five-man unit.

“We don’t get the puck out when we should and we’re not clean,” he said after Thursday’s defeat, which dropped the Flames to 4-5-1 and second-last place in the all-Canadian North Division.

“We’re just kind of like throwing it away and we’re not playing as a unit of five out there in the second,” said Andersson. “It cost us one or two goals in the second and then, obviously, working uphill in the third and it’s tough to do that every other game.”

After Tuesday’s loss to the Jets, veteran forward Derek Ryan used the word “stubborn” to describe the Flames when they revert from their game and attempt to carry the puck through the offensive zone instead of getting it behind defenders.

If Flames fans were hoping that the early-season meeting of the minds would help reverse the team’s bad habits and inconsistencies that have carried over from years past, that might be wishful thinking.

“I guess we haven’t responded as well as we would have liked to,” said Andrew Mangiapane, who scored for Calgary on Thursday.

Andersson was even more succinct: "Not good enough."

-The word ‘leadership’ has many definitions, and Flames forwards displayed one example after the Flames’ 3-2 loss to Winnipeg on Tuesday night. Backup goalie David Rittich got the start, allowing three goals in the first period before settling down and making key saves. Rittich, of course, will likely see less ice time this season given the off-season signing of Jacob Markstrom. Rittich was asked after the game about his confidence and if the season has been frustrating. He responded that he was, in fact, confident, and that he still had a great attitude and work ethic.

Unprompted, Ryan chimed in after Rittich:

“I’ll jump in here real quick to second that. I think Dave’s done a really good job in a situation he’s probably not seen before or comfortable with. He’s been great around practice, working hard, and making sure he’s positive, so I think that he’s done a great job with that.”

- It seems tough for the Flames to really be in a game on nights when Monahan and Johnny Gaudreau are shut down. The team needs more depth scoring. Mikael Backlund has just two goals, while Joakim Nordstrom, Dominik Simon, Josh Leivo, Derek Ryan, Juuso Valimaki, Nikita Nesterov, Sam Bennett and Noah Hanifin have yet to score in 2020-21. The team’s 14 five-on-five goals ranks 24th in the league.

- Ward hinted at lineup changes ahead of facing the Edmonton Oilers in this season’s first Battle of Alberta on Saturday night, saying that the players had been given a fair opportunity for 10 games. Given the common refrain that there needs to be more emotion and competitive fire in the lineup, Zac Rinaldo could make sense as a fourth line option.