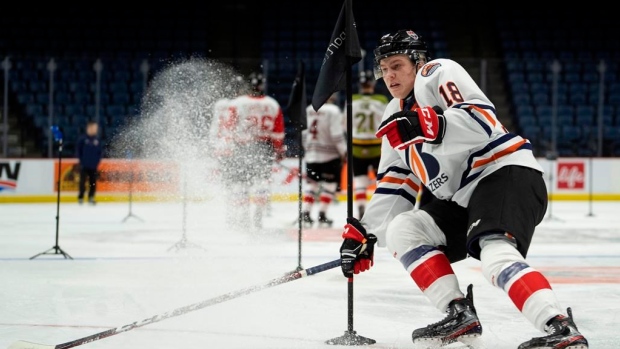 CALGARY — The Calgary Flames took their time selecting Connor Zary in the first round of the NHL entry draft Tuesday.

The Flames owned the No. 19 selection, but twice dropped down the order to gain an additional a pair of third-round picks for Wednesday.

Calgary eventually called Zary's name at No. 24. The Flames had alumni and Hockey Hall of Famer Lanny McDonald announce his name.

The six-foot, 178-pound forward from Saskatoon had an inkling the Flames might be interested in him based on his pre-draft interviews with the team.

""I think we both felt comfortable with each other and they seemed to really like my game," Zary said Tuesday evening on a conference call

""When it came up to 19, I was kind of getting nervous. Then they traded their pick and were back up again and traded the pick again. I was still available for them and I kind of thought 'this is going to be it.'"

Zary had 38 goals and 48 assists in 57 games in his third season with the Western Hockey League's Kamloops Blazers. He was named to the Western Conference all-star team.

"Fifty-fifty pucks, loose pucks, he's a dog on a bone and just plays with a lot of juice. You talk about how responsible he is, but he shot it in the net 39 times in a real good league.

"He's got a great personality in his game."

The Flames shipped out the 19th pick to get the 22nd and 72nd selections from the New York Rangers, before sliding No. 22 to the Washington Capitals for the 24th and 80th picks.

"We got a guy who we think a lot of, high on our list, and we were able to secure a couple assets," Treliving said.

"There were some anxious moments. The scouts are holding the breath when we're slipping down and names are coming up, but I know our guys really like this guy."

The Edmonton Oilers owe the Calgary Flames a third-round pick in either 2020 or 2021 as part of last summer's trade that sent Milan Lucic to Calgary for James Neal.

"What it does, it allows you to make picks or be creative with those," the Flames GM said. "We've got a little bit more ammunition now than we did going into the night."

Zary has played in Calgary's Scotiabank Saddleome against the Hitmen, but has never been to an NHL game there.

"I've been there a few times. Never actually been to an NHL game live, which is embarrassing," Zary said.

"I've always chosen going to hockey practice or my own games over getting the opportunity to go to NHL games.

"The Saddledome is a special building and to have already been playing in it, had a few special moments there already, it's pretty exciting for sure."