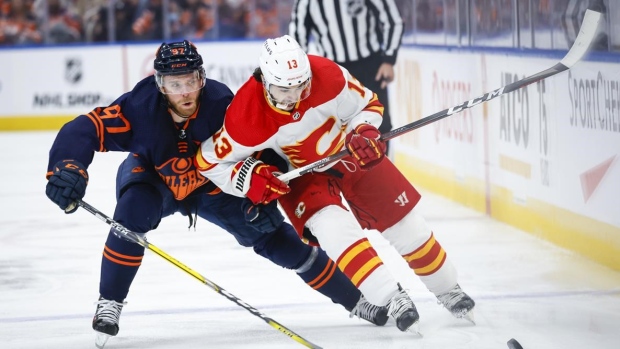 With the Calgary Flames’ season now over, the franchise can focus its attention on one of the biggest questions in its history: Will pending free agent Johnny Gaudreau re-sign with the club, or will the star test free agency?

For his part, Gaudreau re-stated his love for the city on Saturday.

“I’ve been here for 11 years and haven’t got to that ultimate goal and it’s been a while since they’ve won here so I think that would be pretty special — to win a Cup here,” he said.

“It’s something that I kind of dreamed about my whole life, and Calgary is a great place to do it.”

Calgary is the only NHL team he has ever known, and even Gaudreau did not seem ready for the possibility of putting on a different sweater.

“It’s all I’ve known for the past 11 years and it’s kind of a big decision here and I’m just going to try to figure out what’s best for me first and my family and go from there,” he said.

“But Calgary is a special place for me and I do really, really love it here.”

Brad Treliving and Gaudreau’s agent, Lewis Gross, kept talks out of the public eye during the season. With free agency looming, the urgency to have an answer from Gaudreau has only grown.

“We're going to do everything we possibly can to make that happen. We saw what he's capable of. I've believed in this guy since the day I walked through the doors here. Certainly, that's an important piece of business that we've got to take care of."

Teammates have also been making their pitches all season, including two-time Stanley Cup champion Blake Coleman, who brought up how he could be remembered.

“He’s such a big part of this team,” Coleman said.

“In my talks with him, [I am] trying to have him understand what a legacy he could leave in Calgary if he stays. You could probably already put his jersey up in the rafters. Eight more years of Johnny , he’d be cemented forever. And I think that’s something that’s important to him.”

Despite the magnitude of the moment, Gaudreau did not dwell on the future during the Edmonton series.

“I didn’t sit in the locker-room and keep my jersey on or stare up in the stands,” he said.

“That’s something that I didn’t really think of.”

Gaudreau is just one of several major contracts Treliving must maneuver during the off-season. Linemate Matthew Tkachuk is also coming off a career year and needs a new contract a year from unrestricted free agency. Tkachuk said he’d be open to remaining in Calgary long-term.

“At the end of the day, you live in a cap world where you've got 23 mouths to feed,” Treliving said, of the two big contracts. “You treat everybody fairly, but not everybody gets treated the same. Or they'd all make the same. It's a puzzle.”

What is clear is that the Flames will ante up whatever amount needed to keep No. 13 in red and white. What remains to be seen is if Gaudreau will commit. Saturday’s comments hinted at optimism.

“You guys can tell on Twitter — my uncle, my dad, my mom, my sisters, my brother, everyone loves Calgary,” he said.

The tight-knit Calgary group seems to have accepted the outcome, regardless of if he’s friend or foe come the fall.

“It’s a business and we all get it,” Coleman said.

“I didn’t know I’d be in Calgary last season. Who knows what’s in the future for him.”