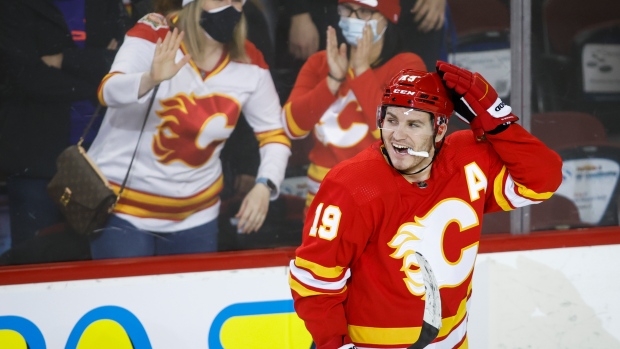 Matthew Tkachuk posted a career-high five assists as the Calgary Flames defeated the St. Louis Blues 7-1 on Monday to move into the second and final wild-card spot in the Western Conference.

"Matthew's got great vision when he's got the puck, and playing on his off-wing this year gives him a whole different dynamic of what he can see and what he can do, and he's making the most of it," Flames head coach Darryl Sutter said.

"He's making plays out there," added linemate Johnny Gaudreau, who had one goal and three assists Monday. "Obviously (a) smart player. He can see the ice really well, uses his teammates, and he made some big plays tonight."

Tkachuk posted a career-high 34 goals and 77 points in 80 games during the 2018-19 season, but has failed to score at that same pace since. He is currently in the midst of a contract year, slated for restricted free agency as his three-year, $21 million contract expires in July.

The 24-year-old credited his linemates for his big night on Monday.

"[Gaudreau] made some great plays, was moving well," Tkachuk said of his performance. "Obviously, him and (Elias Lindholm) are very easy to play with, very easy to read off of. Seemed like tonight was one of those games where one of us would get the puck and the other two were working for space and getting open, and [we had] some nice plays out there and just a lot of time in their zone."