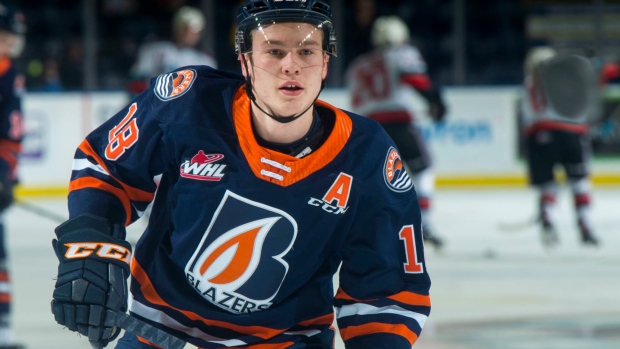 With Hockey Canada's World Junior selection camp currently in quarantine, ​Connor Zary is looking for new ways to impress the coaching staff. The Kamloops Blazers forward is doing his best to stand out during the team Zoom sessions.

"We've been talking about our habits," said Zary, Calgary's first round pick in October's National Hockey League draft. "The one we're talking about right now is trust ... if you get called on you have to bring something small forward so presenting my thoughts on it and showing you can take responsibility goe​s a long way."

The camp entered an isolation period on ​Nov. 23 after two players tested positive for COVID-19, but even though they're stuck in their Red Deer, Alta. hotel rooms players and staff are determined to maximize the time. They certainly believe the bonding process ​can continue.

"One of the biggest things to do with trust is building relationships," Zary said. "It's hard to trust someone that you don't know. Once you get to know the guys around you and the guy beside you and know that he's going to go to war and do anything he can do to put his best foot forward and win a game then you're going to want to do the same thing for him."

With that in mind, a series of virtual social events have been set up during the quarantine, including a Rock Paper Scissors tournament. Zary lost to Halifax defenceman Justin Barron.

"It was tough," the 19-year-old from Saskatoon said with a wide grin. "It was a heartbreaker in Game 7."

"I'm a straight scissors guy. I don't know why."

Some of the older guys in the group of 46 players have split into different committees to help navigate the quarantine period. One group is focused on setting the menu.

"I'll give it to them, they've done a pretty good job," Zary said before breaking into a smile. "We got Mexican tonight so we'll see after that. Maybe you can ask me after that one."

Zary had plenty of reasons to smile during the first week of on-ice activities as he posted four points in the two scrimmages and earned kudos from head coach Andre Tourigny for his work in practice. Zary spoke to TSN via Zoom and recapped his camp so far. The following is an edited transcript of the conversation.

If you had to pick one area of your game that improved the most since you last played in the Western Hockey League what would it be?

"My speed ... Working in the gym and getting my strength up helps a lot with trying to get more power out of my stride and a little more length. So, just focused in on that and doing whatever I can to grab that extra one per cent and make myself a little bit faster and a little bit quicker in all areas of the game."

Tourigny said you were one of the best players in practice. What allowed you to make a positive first impression?

"Just my mindset coming in. I wanted to do whatever it takes to make the team. It's about not taking any time off whether it's just a workout or you're on the ice practising ... even if it's just a warm-up drill where we're practising lifting sticks and getting in front of a guy you still want to give 100 per cent effort and do what you can to get the details right. The famous quote is, 'You practise how you play,' so it's getting that mindset in my head and showing what I can do. There's always someone watching no matter what you're doing."

When we spoke back in June you mentioned how you enjoy reading criticism and you adopt a kind of 'screw-you mentality.' How did you motivate yourself for this camp?

"My biggest motivation is this is something you dream about as a kid. This is where you want to be. When you're out on the outdoor rink growing up you're pretending to be Jordan Eberle scoring a goal with 5.4 seconds left against Russia or something like that. This is the next step. And also just motivation from last year ... I had an opportunity to make that team and then not being able to make that team pushed me forward. This is my once-in-a-lifetime opportunity to make this team and play in the World Juniors so that's how I'm taking it."

You really stood out in the second scrimmage while playing alongside Kirby Dach and Phil Tomasino. What worked well?

"We were focused on details and playing our positions the right way and doing all that first ... It's hard because you've never played with those guys in your life, but once we got out there we were just kind of going as hard as we can and things fell into place. We were confident with the puck and with each other."

What stands out about Dach?

"A big body, good skater and he moves well out there. And, obviously, when he has the puck on his stick he's not losing the puck. You got a guy who's 6-4, 200 pounds and when he has the puck and he's in the corner, he's protecting the puck and he's not losing the puck. He uses his body well and he uses his skill well and you know you just got to give him outs and give him an opening and he'll get you the puck. It's easy when you play with a guy like that down the middle whose got NHL experience, a full year under his belt, and played really well in the playoffs. So, I think that made my job easy and just trying to read off him, read off Tomasino, really good, skilled players, and trying to do what I can to open space for them."​

What was your best play from that game?

Kirby Dach has his second goal (third point of the night) after finishing off this play.

Tomasino and Zary have proven to be fantastic linemates for the #Blackhawks forward.

Tomasino said he was surprised you passed back to him because he was heading behind the net. What did you see?

"I saw him get behind the defender's heels and he's a right-handed player so he'd be on his forehand and able to have the whole ice in front of him from behind the goal line and see what's going on. I didn't really have a chance to cut to the middle so as soon as I saw him get behind the d-man's heels I just read that if I got the puck to him he'd probably have a better read on all the players coming downhill and attacking the net."

You sealed the win with a long-range empty-net goal from the face-off dot in your own end. Is that a sign of your confidence or just that your team had a two-goal lead?

"Ah, a little bit of both (smile). It was kind of a mad scramble. I remember the puck kind of went up in the air and guys were falling all over the place and I just got off the ice and, honestly, my first thought was just get the puck out of the zone and as I was looking up, saw the net open and I put a little extra behind it and (laughs) just good accuracy, I guess."

You had momentum in the first week and now you're stuck in your hotel room. How are you holding up?

"The first couple of days, like anyone, you're going to be a bit upset. You don't want to sit in a hotel room, but after a couple days go by you realize you're in for the long run anyways so you might as well make the most out of it. We got spin bikes. We got Zoom workouts. We got some Zoom meetings and some fun activities at night. We were allowed to bring our gaming consoles so a bit more PS4 ... and a lot of FaceTime with my parents and buddies and stuff like that to keep me busy."

‘Pressure is a privilege’ - #WorldJuniors hopefuls were honoured to video chat with #CANWNT players @stephlabbe1 and @keishaballa today. ⚽️🇨🇦

Connection in quarantine, playing for each other, hometown crowds, controlling what you can control... Olympian words of wisdom! 🙌 pic.twitter.com/hrar8qXRMD

You've had some guest speakers talk to the group on Zoom, including Canadian national soccer team players Stephanie Labbe and Kadeisha Buchanan. What did you take from that?

"They're unbelievable athletes and Olympians so just hearing them and what they've been through in this whole [pandemic] and what's kept pushing them and how they've continued to get better ... was pretty cool. The thing that gave me chills, I forget which one of them said it, but she said growing up she and her family watched the World Juniors and she was so excited to watch it again. It made you realize how many people in Canada are so excited to watch. Everyone's going to be home with not much to do and they're all going to be tuning in so that stuck out in my head and gave me a lot of chills because that's where I want to be. I want to show Canadians a bit of hope and comfort and hopefully win a gold medal."