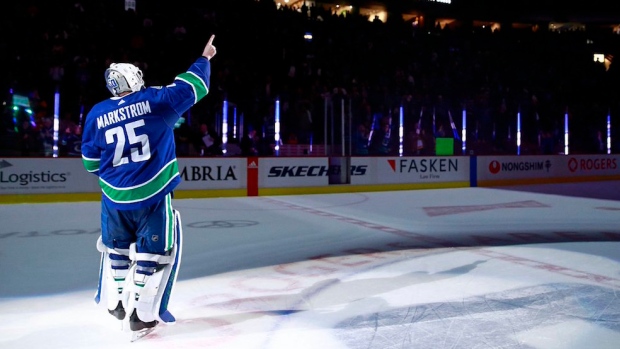 Markstrom was hot commodity in a busy goalie market, and thus commanded a big number from the Flames.

"I believe that the Calgary has got something really big going and can't wait to be part of it," Markstrom said Friday during a conference call from his hometown of Gavle, Sweden.

In Brad Treliving's six seasons as Calgary's general manager, the Flames have had 11 different goalies start in net. The GM was under pressure to provide stability at that position.

"To me, this was the best player at his position that was available to us today," Treliving said. "It was a need that we wanted to address not only for now, but moving forward.

He likely would have started 60 or more games for a third straight season if the NHL hadn't suspended operations March 12 because of the COVID-19 pandemic.

Markstrom made his NHL playoff debut when the league re-started in August. He backstopped Vancouver to the second round of the playoffs.

Markstrom was injured during the second-round series against the Vegas Golden Knights. Thatcher Demko played the final three games. The Canucks bowed out in Game 7.

Cam Talbot and David Rittich were Calgary's tandem last season with Talbot getting the nod as the playoff starter.

Talbot, 33, signed a three-year contract with the Minnesota Wild on Friday.

Rittich, 28, appeared in 48 games for Calgary last season and has a year remaining on his contract.

"You need goaltending and you need depth at the position," Treliving said. "We've got it now with two guys. It sets us up moving forward."

Markstrom's $6-million annual salary is a significant raise. His previous contract in Vancouver was $11 million over three years for an average of $3.6 million, according to CapFriendly.com.

"I felt like the last two years have been where I kind of figured out my game a little bit with the help of the goalie coaches and coaches," Markstrom said.

"I kind of understand what it takes to be a top goal in this league and the amount of work it takes.

"I feel like I got plenty of more levels to reach and evolve. I can't wait to do that in a Flames jersey."

Markstrom becomes the fifth Swede under contract with the Flames. He joins forwards Mikael Backlund and Elias Lindholm, and defencemen Oliver Kylington and Rasmus Andersson.

Markstrom and Lindholm are both from Gavle and often golf together.

"Sweden is not the biggest country in the world, so you either played against them or with them growing up," the goalie said.

"It's going to be fun to see those guys and not play against them. There's a bunch of not only Swedish players on the Flames I'm happy to be on the same team (with) and not against."

The Calgary Flames also signed centre Byron Froese to a two-year deal and agreed to terms with Buddy Robinson and Zac Rinaldo on one-year contracts.

Meanwhile, defenceman TJ Brodie is leaving the Flames after 10 seasons to join the Toronto Maple Leafs on a four-year, $20 million deal.