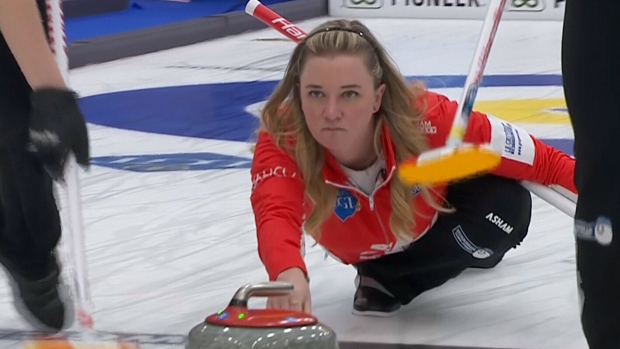 MOOSE JAW, Sask. – Chelsea Carey is donning Canadian red at the Scotties Tournament of Hearts for the second time in her career this week in Moose Jaw, after edging out Ottawa’s Rachel Homan in last year’s thrilling final.

Carey’s first experience as Team Canada at the Canadian championship came in 2017 when she posted a solid 9-2 record in the round robin before losing to Northern Ontario’s Krista McCarville in the page playoff 3 vs. 4 tilt.

Despite the adage that a defending champ has a target on their back, which is also often a storyline, Carey isn’t buying that theory.

“I don’t know that you do. They are all the teams we play all the time, right. Maybe a little bit with some teams, but I don’t look at Rachel [Homan] as Team Ontario. It’s just Rachel…we play them every week,” Carey told reporters Friday afternoon at Mosaic Place.

Winning the Scotties means you don’t have to battle through a trying provincial playdown the following season, something that obviously comes with many positives, but also some other details to keep in mind.

“You’re more well-rested, you got time to practice and go back to some technical stuff and go back to basics where the teams at provincials don’t have time to do that. On the other hand, they’re coming in on an emotional high having just won a big event,” explained the 35-year-old. “It’s better physically, especially for old people like me to have the break, but it’s your head and your emotions that you have to manage. It’s not hard to get up for this event either so when you get here you are right back into it.”

Carey’s squad out of the Glencoe Curling Club in Calgary with Sarah Wilkes at third, Dana Ferguson at second, Rachel Brown at lead and Chelsea’s father Dan Carey serving as coach are 32-26 on the season and are the No. 4 seed at the Scotties.

This will be Carey’s fifth appearance at nationals and the Winnipeg native says every trip to the big show makes you more and more relaxed on the ice.

“The first one is your first one, so you’re really excited and then you really want to win one. So once you’ve done that, you can kind of go, ‘that’s checked off,’ not that you don’t want to win again, but it takes some of the pressure off because you never know how many you’re going to get back to,” said the skip. “So, when you go a bunch and don’t win, don’t win and don’t win, you start to go, ‘Am I ever going to make this happen,’ and on the other hand, doing it makes you want to do it more. I think the more times you come, the more experience you have, the better you are at managing your emotions throughout a long and gruelling week.”

The Winnipegger’s second Canadian title came in memorable fashion last year as she stormed back from a 5-1 deficit, grabbing steals in four of the last six ends to stun three-time Scotties winner Homan, 8-6, in 11 ends.

“So far both wins have felt pretty fantastic so I’d like to keep doing [that] until they don’t feel that way, which I don’t think will ever happen.”

You can watch Team Canada open the main draw of the Scotties Tournament of Hearts Saturday afternoon against Team McCarville from Northern Ontario. Action starts at 2:30pm ET/11:30am PT on TSN 1/3/4 or streaming on TSN.ca, the TSN App and TSN Direct.