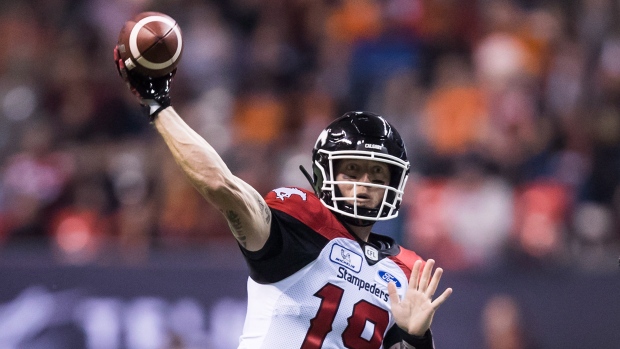 Mitchell was at practice once again on Wednesday, but Stephen reports he did very little on the field.

He took part in practice Tuesday for the first time since being ruled out of last week's loss to the Winnipeg Blue Bombers, though Austin reported  Arbuckle took the majority of snaps with the first-team offence then too.

“It’s just making sure I’m fully ready to go,” Mitchell said. “Using all three days (of practice) and not trying to kill me on Day 1 and then, on Day 2 and 3, not having time to recover and you kind of feel like you’re almost going downhill towards the game. We want to build up towards the game.”

“He’s worried about overloading it right now,” said Dickenson. “Not concerned that there’s an injury there, but I do feel that he hasn’t done a lot, so gradually, we need to pick it up if he’s going to be the guy.

“I trust he understands his body, and hopefully he gets there.”

The CFL's Most Outstanding Player and Grey Cup MVP in 2018 hasn't played since injuring the pectoral muscle in his throwing arm in Week 3. He was placed on Calgary's six-game injured list in early July.

Arbuckle has gone 4-2 as the team's starter since taking over in Week 4. Arbuckle completed 22 of 35 passes for 260 yards with one touchdown and two interceptions against the Blue Bombers.

The Stampeders enter Week 10 tied with the Saskatchewan Roughriders and Edmonton Eskimos for second place in the West Division. The Alouettes (3-4) sit second in the CFL's East Division.