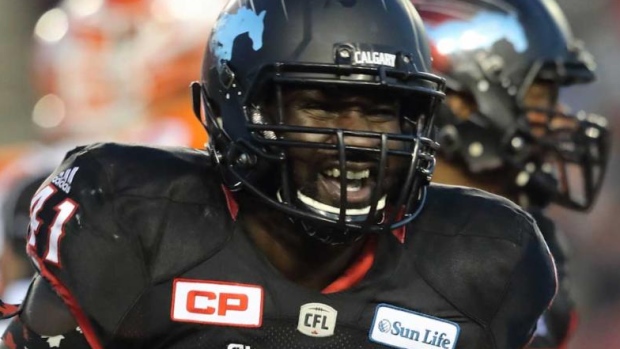 CALGARY — Defensive end Cordarro Law has re-signed with the Calgary Stampeders, but the coaching staff is in flux.

Head coach Dave Dickenson confirmed Thursday that special teams co-ordinator Mark Killam will remain with the club, but quarterbacks coach Ryan Dinwiddie was on the move.

"There's a lot going on in the CFL right now and it's a challenge to keep good people," Dickenson told reporters.

Dickenson expanded on the previous day's announcement that he's handing off the offensive co-ordinator role he held for eight years to offensive line coach Pat DelMonaco.

"We lost Pete and we're going to lose Ryan Dinwiddie as well," Dickenson said. "I wanted to keep Pat on the staff. He was also a guy that people were looking at.

"I wanted to make sure Pat DelMonaco was part of the Calgary Stampeders and the best way to do that is to give him more responsibility.

"The title is not really affecting me because I believe Pat earned it and it's justified. You're not just giving away things just to make people happy."

Law led the Stampeders with a career-high 10 sacks in his sixth season in Calgary.

The 31-year-old from Whitfield, Alta., also had 41 tackles, two forced fumbles and a fumble recovery.

Law was sidelined the final two games of the regular season and the West Division semifinal because of injury.

"I'm glad to be back," Law said in a statement. "We definitely have some unfinished business to take care of."

He's compiled a career 114 tackles in 47 regular-season games for Calgary. Law appeared in eight playoff games and won a Grey Cup with the team in 2018.

The Southern Mississippi alum played for the Stampeders in 2012 and 2013 before joining the NFL's San Diego Chargers for two seasons, and then returning to Calgary in 2016.