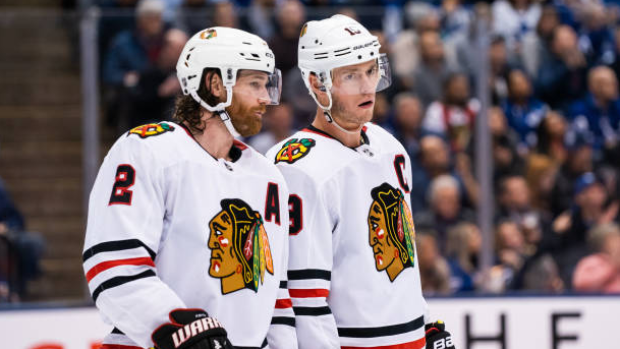 Is the answer to what ails the Edmonton Oilers a 37-year old defenceman carrying a $5.5 million dollar cap hit?

Sometimes you have to frame the question a certain way. In light of all of the trade talk surrounding the Oilers and soon-to-be Hall of Fame defenceman Duncan Keith, I think it’s a critical one to answer. The rumour mill has been flush with speculation over Keith, with a lot of the discussion centered around how much the Oilers should be willing to pay for a player at the tail end of his playing career.

Ultimately, we don’t know where the asking price for Keith and the final year of his contract will land. The bullish case – the one the Blackhawks are surely selling – is that there are still miles left with Keith, and that much of the overarching performance issues are a byproduct of the team around him. The bearish case is that Keith was a primary contributor to Chicago’s struggles.

- The Oilers (or any other team) could negotiate a trade where the Blackhawks retain up to 50 per cent of the player’s salary (including bonuses) and cap hit, but no higher than that; and..

The point being: Edmonton is in a tricky spot here. General manager Ken Holland and the rest of the Oilers organization have mounting pressure to deliver a true contender. The team has some cap space to play with, but it’s limited, meaning opportunity costs will exist.

So, in short: is Duncan Keith the piece to put the Oilers over the proverbial hump irrespective of what they have to give up?

Let’s start with the basics: how has Keith produced in recent years in Chicago? I’m using Goals Above Replacement as a proxy for player production here, but other measurements show a similar (and deeply discouraging) trend. I also think it’s worth juxtaposing this against a player like Patrick Kane – another veteran Blackhawks skater, also playing tough minutes with a depreciating team,

Over the last three seasons, Keith (anchoring the team’s top defensive pairing) and Kane (a fixture on the team’s first-line) have played 1,500 minutes together. That’s a lot of time, but it’s also in line with what we have seen from Chicago for most of the past decade. Because Chicago has been so dynastic (and so consistent) with deployment, we can see how their best units have fared together over the years, and then look again at how they performed when split apart.

Perhaps Keith can no longer play the tough minutes the same way some of the other Blackhawks veterans can, but there is increasing evidence he’s no longer driving positive performance. Expecting any 37-year old to be productive with this many miles on his legs seems unrealistic, but the reality is an Edmonton trade would see him as a regular fixture in the lineup irrespective of what they offer.

There is something else that I think is worth addressing. One of the arguments I have read over the past week is that while Keith isn’t the player at 37-years of age that he used to be, he could still add value in lesser minutes in more of a depth defensive role.

Until we see that in practice, it’s somewhat hard to argue. But if we look at Keith’s performance relative to calibre of opponents over the last three seasons, we see two things: Keith’s play was noticeably better against weaker competition, but the Blackhawks were still in the deep red. And just to eliminate the possibility of goaltending diluting the data in either direction, we can use expected goals to illustrate the same point: 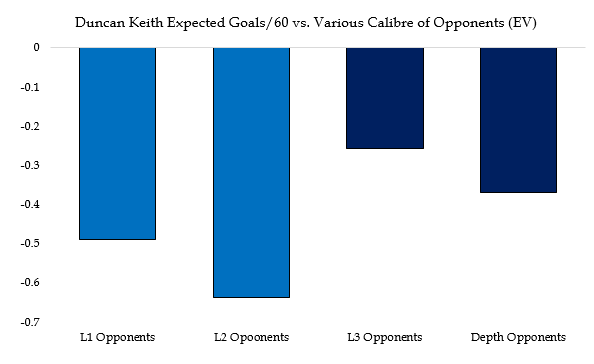 Keith is a Hall of Fame defender and it’s certainly within the realm of outcomes that he has a bounce back season of sorts playing with better teammates around him – and there’s no better teammate in the world right now than Connor McDavid.

But the Oilers organization is trying to figure out how to inject talent into the lineup to deliver a more competitive roster. It’s hard to see how Keith provides help on this front, even if they can trade for him at a fraction of the cost.

A fantastic player in his prime, but that prime appears long, long ago.