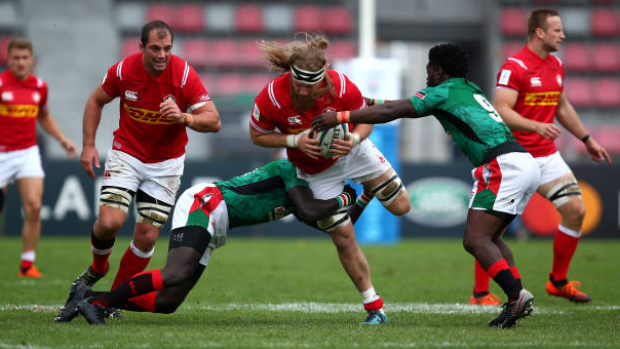 Canada will be without forward Evan Olmstead and winger Taylor Paris when it opens Rugby World Cup play Thursday against Italy in Japan.

Both are nursing knocks and have been ruled out of the match at Fukuoka Hakatanomori Stadium in Fukuoka City.

Canada has watched from the sidelines.

"It's a tough pool we're facing but we've worked a long while towards this and this first one is going to be a huge game for us," Canada coach Kingsley Jones said in a statement. "We got a look at Italy in their match against Namibia and we're excited to get on the pitch and have a crack at them."

"Unfortunate for Taylor Paris and Evan Olmstead, they've missed out on selection through slight low body injuries. Nothing that's going to keep them out long-term but they're not quite ready for this one. Overall we're pleased with the combinations we have."

Follow Team Canada's journey at the Rugby World Cup with TSN Direct, the exclusive streaming service from TSN. Stream every match, live and on demand, all tournament long! Subscribe Now >

Canada is also missing influential lock/flanker Kyle Baillie, who injured his knee in the final pre-tournament game against the U.S. in Vancouver. Baillie may also miss Canada's second game, Oct. 2 against the All Blacks.

The six-foot-six 260-pound Olmstead had been expected to start in the second row and his absence is a loss. A big man with an out-of-control mop of hair that is hard to miss, Olmstead is a battering ram with plenty of go-forward.

Paris, while a danger-man, was in a three-way battle for two spots on the wing with competition from DTH van der Merwe — Canada's all-time leading try-scorer with 38 — and the physical Jeff Hassler. All three are likely to get playing time at the tournament.

Perhaps the only surprise is Nick Blevins over Ciaran Hearn at inside centre although Blevins adds a more physical punch to the midfield. Both have experience with 70 caps for Hearn and 62 for Blevins.

Gord McRorie is at scrum half with Irish-born Peter Nelson, who made his Canada debut on July 27, quarterbacking the Canadian backline at fly half. Patrick Parfrey starts at fullback.

There are no surprises in the front row with veteran Hubert Buydens joining Matt Tierney and hooker Eric Howard.

Conor Keys and Josh Larsen, a late replacement for the injured Justin Blanchet on the World Cup roster, partner in the second row. Captain Tyler Ardron starts at No. 8 with Mike Sheppard and Lucas Rumball at flanker.

The relatively inexperienced starting 15 has a combined 435 caps, with Bevins, van der Merwe, Buydens and McRorie accounting for 217 of that total. The forward pack has 199 caps, compared to 141 for Italian captain Sergio Parisse, who is being rested Thursday.

The travelling Canadian squad left the peace of Nagato on Sunday to prepare for the match in Fukuoka City.

"The first nine or 10 days we couldn't have had a better fit for what the team needed," said former Canadian captain Gareth Rees, a World Rugby Hall of Famer who is serving a Canada's media manager at the tournament. "It was kind of a smaller town, Nagato, and an amazing training facility ... We genuinely got a lot of work done."

In a tough pool highlighted by three-time champion New Zealand and two-time winner South Africa, Canada is targeting Namibia. But an upset win over Italy could net a third-place finish in the group which means automatic qualification for the 2023 tournament.