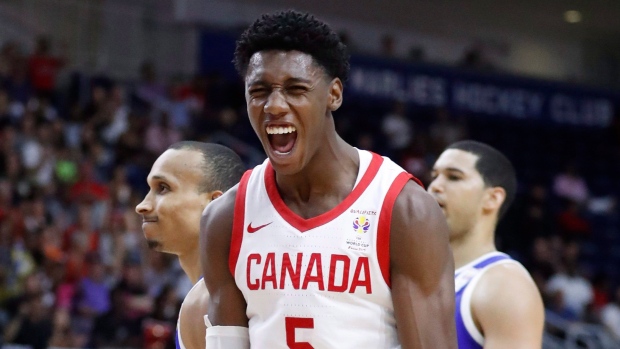 TORONTO – When you consider the current state of the NBA, it would be hard to fault any of its players for politely declining invitations from their respective national teams this summer.

Just take a quick look around the league on Wednesday morning, as Canada’s senior men team was getting set to open training camp ahead of its must-win Olympic qualifying tournament later this month.

Chris Paul, the catalyst of Phoenix’s resurgence, was the first casualty. The Suns point guard was placed in the COVID-19 health and safety protocols, putting his availability for the Western Conference Finals in doubt. Minutes later, it was reported that Kawhi Leonard would miss time with the knee injury he suffered in Game 4 of the Clippers’ series-tying Game 4 win over Utah. He, too, is out indefinitely.

Leonard will be the eighth different all-star to miss a playoff game this year, setting a new NBA record. Assuming Paul misses at least the start of his next series, he’ll be the ninth. It’s a stat LeBron James referenced when basketball’s most influential player sounded off on Twitter later in the afternoon, connecting the league’s influx of injuries with its condensed schedule this season.

“These injuries [aren’t] just ‘PART OF THE GAME’,” James wrote in a series of posts. “It’s the lack of PURE RIM REST rest before starting back up.”

Coming off a shortened off-season following the restart in Orlando last fall, the 2020-21 campaign has squeezed 72 games and the playoffs into a span of six months, all of it amid a global pandemic.

More than ever before, you should be able to understand why some players might opt to spend their break training, healing physically and mentally, or just enjoying some much-needed downtime with family and friends. More than ever before, we can also credit those who have given those things up to represent their country.

“I want to start by honouring our players that are sacrificing to be here,” said Rowan Barrett, general manager of the Canadian senior men’s basketball team, following the club’s first practice session on Wednesday. “I don’t use that word lightly, when you think about the condensed season our players have had to play in as a result of COVID [and] the historic rate of injuries.”

“I'm super appreciative of the guys that are here,” said Nick Nurse, who took a short vacation after Toronto’s season came to a disappointing end and is back at the helm of Canada’s coaching staff. “There's a lot [of reasons not to play]. We've been in the bubble in Orlando, a lot of these guys were there as well. We've played in front of no fans. We've gone through all these protocols. There's been testing, like, 400 straight days of testing or whatever it was. And we're back in pretty heavy protocols again, and not to mention contracts and body and rest and family, and the list goes on and on and on and on. So, yeah, what does it mean? It means everything that they've committed. It really does.”

Nurse and the Raptors have lent Canada Basketball their facilities in Tampa for a one-week training camp, which concludes next Thursday.

As usual, if you focus on whose not there or get hung up on what the program’s optimal roster would look like if everybody were available, you might be disappointed. Outside of the United States, Canada has produced more NBA players than any other country for seven consecutive seasons. 21 Canadians appeared in a game during 2020-21, including some of the league’s brightest young stars. The idea of them all joining forces on the national team this summer – or any summer – is tantalizing, but it’s also unrealistic. It’s not for a lack of interest or national pride. Things like injuries, contractual status, personal obligations and scheduling conflicts will always prevent some guys from playing, and that’s not limited to Canada.

On Wednesday, the league’s reigning MVP Nikola Jokic announced that he won’t be available to play for Serbia this summer, citing the toll this past year has taken on him. James and several other American stars have already ruled out the possibility of suiting up for the U.S.

In this case, Jamal Murray and Shai Gilgeous-Alexander – arguably Canada’s two best players, who both committed to playing before getting hurt – are recovering from injuries. Kelly Olynyk and Khem Birch are about to become free agents. Chris Boucher has opted to spend the summer rehabbing a knee ailment and preparing for next season.

Even without them, as well as Tristan Thompson and Brandon Clarke, Canada’s 24-man camp roster is loaded with talent. It’s an intriguing mix of experience and youth.

The list includes 10 NBA players headlined by Andrew Wiggins, who returns to the program for the first time since 2015; R.J. Barrett, who’s coming off a breakout sophomore season with the Knicks; emerging guards Lu Dort and Nickeil Alexander-Walker, as well as stalwarts Cory Joseph and Dwight Powell. They’ve got a couple of players with NBA experience in former first-overall pick Anthony Bennett and sharpshooting forward Andrew Nicholson, possible future NBAers like Gonzaga’s Andrew Nembhard, and accomplished international players such as Melvin Ejim and Phil Scrubb.

While Dillon Brooks and O’Shea Brissett are on the roster, neither forward was with the team to start camp and it’s unclear whether they’re expected to join in progress.

It’s not an insignificant time commitment for those that have signed on to play. Barrett and Nurse will whittle the roster down to 12 before flying to Victoria, where they’ll host one of FIBA’s six-team last chance Olympic qualifying tournaments from June 29 to July 4. Only the winner will earn one of the final spots in Tokyo.

If they’re fortunate enough to punch their ticket to the Olympics for the first time since 2000, they’ll travel almost 15,000 kilometres going from bubble to bubble in three different countries over seven weeks together. From Florida to British Columbia to Hawaii – where they’ll train ahead of the Olympics, should they make it – to Japan, all of it with one goal in mind and a love of the game and country in their hearts.

“I think in any situation, regardless of the reason, when you are asked to spend seven weeks on someone else’s schedule, it’s challenging and especially in these strange COVID pandemic times,” said Powell, the veteran Mavericks forward. “But, when that reason is to compete for your country, it makes the decision a little bit easier.“

Powell is just 17 months removed from suffering his own serious injury, a torn right Achilles tendon that kept him out of game action until December and limited him for most of this past season. He was also the last Canadian player remaining in the NBA postseason. Just 10 days separated Dallas’ elimination in Game 7 of its opening-round series with the Clippers and the national team’s first practice on Wednesday. If Canada qualifies, he’ll have seven weeks off before reporting to Mavericks camp at the end of September. Essentially, he’s agreed to cut his summer in half to chase a lifelong dream of representing his country on the world stage.

“For the guys that are here, I think we are all on the same page in terms of knowing what we are giving up and therefore it has to translate into the effort and passion we work with here this week and carry on into competition,” said Powell. “We are all very excited about this opportunity because that is what it is, first and foremost. So the sacrifice is secondary to the fact that this is an opportunity to represent our country and compete for something that we all hold very near and dear to our hearts. We know that we can make our families and our country proud. That is the main focus really.”

“I think that I almost forgot, because it's been two years since I've coached this team, just how much heart and soul and stuff that they come to work with,” Nurse said of this group following Day 1. “You can just sense it, like, immediately. When I saw them all together filling out some paperwork the other night when they got here, you can just sense this tremendous heart that they have. You certainly sense it on the practice floor. And they couldn't be better to coach. And that's a strength. A big strength.”