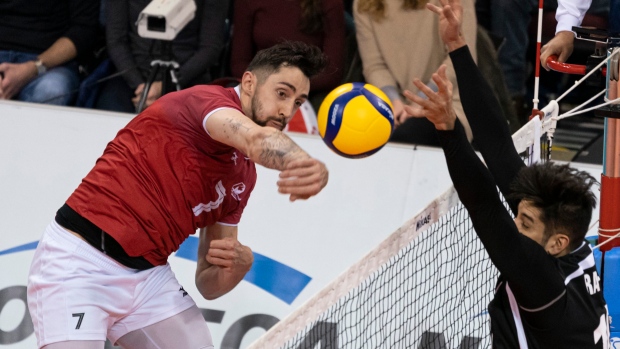 VANCOUVER — The Canadian men's volleyball team got out of the blocks with a straight-set win over Mexico on Friday night but now face their biggest hurdle on the road to the 2020 Summer Olympics.

That sets up Saturday's game against No. 18 Cuba.

"It could be the decisive match," said head coach Glenn Hoag. "They are a good team, very physical, very powerful. They rely on that. We are going to have to be patient."

Canada wraps up the tournament against Puerto Rico on Sunday while Cuba plays Mexico.

The winner of the four-team tournament gains a berth at the 2020 Summer Olympics.

"It was an important win for us," said captain Gordon Perrin, a native of Creston, B.C. "We got to work on a few things.

"It was good to get some touches before we face Cuba."

If the Canadians were nervous, playing in front a hometown at Vancouver's Pacific Coliseum, they didn't show it.

Canada won the first match easily. In the second, the Canadians fell behind 4-0 early then fought back to tie the match 5-5. It was a back-and-forth battle before Canada took control by scoring seven straight points for a 16-9 lead.

With the Mexicans on the ropes, Canada took no chances in the third, racing out to a 13-4 lead.

"They had nothing to lose," said Hoag. "We knew they were going to come firing with their serves, which they did.

"They put pressure on us with their serves and we held well. Once we settled down and got the flow of our game going it was much better."

Cuba has qualified for the last four Olympics. They finished 11th in 2006, fourth in 1992 and won the bronze medal at the 1976 Games in Montreal.

"We are going to have to be patient," said Hoag. "Our serving game (against Mexico) was really good. This is what we have been working on.

"We know that's one key to qualify is how well we serve."

The men qualified for the 2016 Rio Olympics after an absence from the Summer Games of almost a quarter-century. The 12th-seeded Canadians bowed out to Russia in the quarterfinals.

While the men are playing Vancouver, the Canadian women's team are at an Olympic qualifying tournament in Santo Domingo, Dominican Republic.

The Canadian women placed ninth in 1996 in their last Olympic appearance.

The round-robin tournament consists of best-of-five matches. The team with the best record wins. If there is a first-place tie, it's broken by match points.

Five Canadian teams — men's and women's rugby sevens, women's softball, men's field hockey and women's water polo — have already qualified for the Tokyo Olympics. That matches the previous high of a non-boycotted Games — excluding the 1976 Olympics in Montreal when the country sent nine teams as a host.

Besides the volleyball squads, basketball and soccer teams also have a chance to punch their tickets to Tokyo.