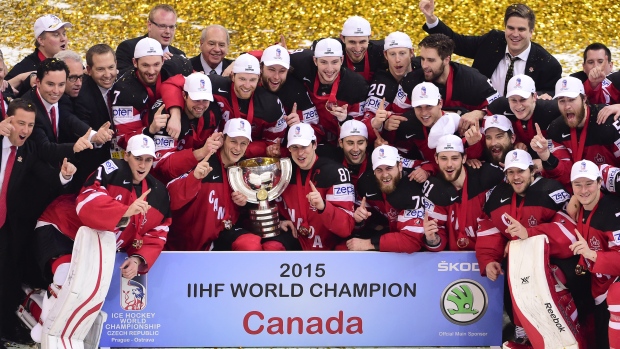 PRAGUE - Team Canada was perfect in Prague, capping an outstanding run at the world hockey championship with a dominant win over its archrival.

After five straight years of quarter-final defeats, the Canadians are heading home with world championship gold medals for the first time since 2007 after a 6-1 thrashing of defending champion Russia on Sunday at O2 Arena.

Arguably the deepest team in a tournament rich with big-name stars, the Canadians ran the table in 2015 with a perfect 10-0 record.

"Our guys really wanted to win — they really did," said coach Todd McLellan.

Crosby finished the tournament with 11 points and became just the eighth Canadian player to join the Triple Gold Club, adding his world championship win to Olympic gold medals in 2010 and 2014 and his 2009 Stanley Cup.

"It's a great honour," said Crosby of the achievement. "I've been fortunate to play for some great teams. You know sometimes you just need some luck. I feel fortunate to be a part of it and it's a privilege that we could do this as a group."

Crosby was quick to share the tournament win with his teammates.

"That was really the story for the whole tournament. Everyone contributed, every line, both offensively and defensively," said Crosby. "We had some guys did a great job on the penalty kill. Smitty (Mike Smith) was awesome in net. It was a total team effort."

Evgeni Malkin had the only goal for Russia, and star forward Alex Ovechkin was held off the scoresheet.

All tournament long, Canada relied on a potent and balanced scoring attack. On Sunday, the fourth line set the tone for the win.

When Canada took a 4-0 lead at the 9:02 mark of the second period, the Russians took a time out in an attempt to regroup, still looking for their first shot on goal in the period.

But Canada's dominance was absolute. Giroux, on the power play, and MacKinnon added insurance goals in the third period to lock down Canada's first win in history over the Russians in a world championship gold-medal game — and by the biggest margin of victory ever surrendered by the Russians.

Canada did win the 1955 world title against what then the U.S.S.R., and the tournament was round-robin.

Smith's bid for a third-consecutive shutout was foiled when Malkin scored Russia's only goal with 7:13 remaining in the third period. Shots on goal were 37-12 for Canada in the game.

Strong at both ends of the ice, Canada's 66 goals scored set a new Canadian tournament record.

In the bronze-medal game played earlier on Sunday, forward Nick Bonino of the Vancouver Canucks had a goal and an assist as the United States shut out the host team from the Czech Republic by a score of 3-0. The last medal for the United States was also a bronze, in 2013.

Notes — Scott Niedermayer, who is also a Triple Gold Club winner, was one of seven people inducted into the IIHF Hall of Fame on Sunday. Niedermayer was unable to attend the ceremony due to his assistant coaching commitment with the Anaheim Ducks, who are currently playing in the Western Conference final of the Stanley Cup playoffs.