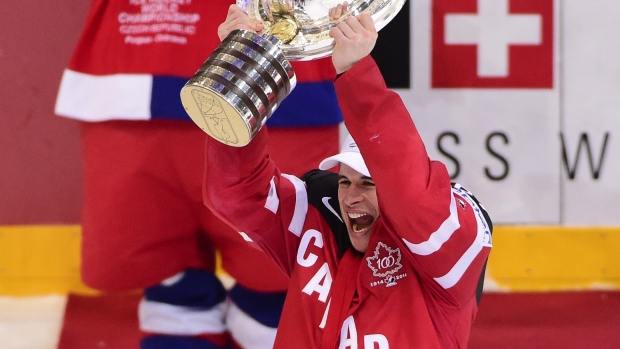 In what has already been a remarkable hockey career, Sidney Crosby became a member of the exclusive Triple Gold Club on Sunday.

With Canada's win over Russia, Crosby now has a World Hockey Championship gold medal to go with his two Olympic gold medals and one Stanley Cup championship.

There are 26 players and one coach to win the three greatest team awards in the sport.

Crosby led the Pittsburgh Penguins to a Stanley Cup victory in 2009 in what would become the start of a storybook year ahead.

In February of 2010, he scored the game-winning goal to help Canada defeat the United States in the gold medal game on home soil at the Vancouver Olympics.

Four years later in Sochi, he was named captain of the Olympic team and led Canada to a successful defence of their gold medal, beating Sweden in the final.

Crosby also played in two World Junior Hockey Championships, taking home silver in 2004 and then returning to win gold in 2005.

The following year, he made his first appearance at the World Hockey Hockey Championship, leading the tournament in scoring and earning top forward honours for Canada, which finished fourth.