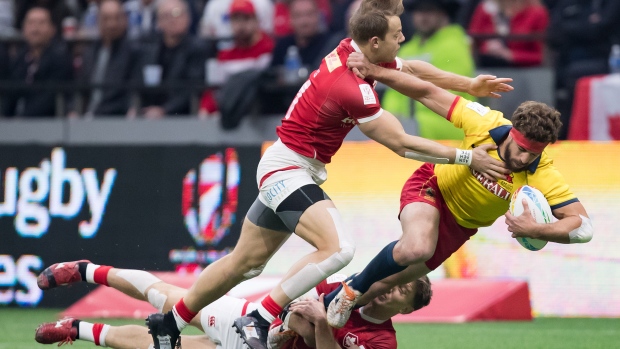 VANCOUVER — Given the chance Canada made no mistake.

Justin Douglas scored his second try of the game with South Africa playing a man short due to a yellow card as Canada used a 26-19 victory to win the bronze medal on Sunday at the HSBC Canada Sevens Rugby tournament.

"With yellow cards you are hoping for at least one score," said Harry Jones of West Vancouver, who celebrated the win with family and friends. "It's a crazy game and you have to be switched on every millisecond or else it can go the other way."

The bronze was Canada's best finish at the Vancouver tournament since a seventh in 2018 and their best showing in the World Rugby Seven Series since 2018 when the men were fourth in Cape Town and Paris.

It also was Canada's first win over South Africa in seven years.

Nathan Hirayama of Richmond, B.C., had a try and three converts.

There were some anxious moments as time wound down and South Africa battled to tie the match, but the Canadian defence held.

"It's all mental at that point," said Jones. "The bodies are hurting but the crowd did it for us . . . pushed us in the final few minutes to hold on. It was amazing."

Canada's previous best finish in a tournament this year was a fifth in Hamilton, New Zealand.

"We've been on a path since last August," said coach Henry Paul. "It's going in the right direction. We're still finding out a little bit about ourselves."

Hirayama said the medal performance will boost the team as it prepares for this summers Olympic Games in Tokyo.

"There's definitely a belief in the squad," he said. "I think we're growing and we're taking good steps forward, leading toward the summer, which at the end of the day is our biggest goal."

The bronze medal soothed the wound from a heart-breaking loss in the semifinal.

Canada gave up a pair of tries less than 30 seconds apart, then were denied a last-minute scoring chance in losing 19-14 to Australia.

With Canada threatening to tie the match in extra time Theo Sauder was tackled at the goal line. An instant replay showed the ball touched down just before crossing the line.

"I wish my arm was one inch longer," said the Vancouver native.

The Canadian used a 21-0 win over Spain earlier in the day to advance to their first-even semifinal at the Vancouver tournament.

Scrum-half Lucas Hammond had a big game, scoring the game's first try and making a big defensive play when he knocked a Spanish player to touch at the goal line.

The Toronto native has just returned to the lineup after missing 14 months with a ligament injury in his foot.

"It was a tough year," he said. "I was always focused on this moment and getting back into it."

The Canadians won all three of their games during Saturday's opening day of competition in the 16-team tournament. They started with a convincing 31-21 win over France, needed a couple late tries to upset Fiji 26-21, then pounded Wales 29-7 to finish on top of Pool B.

Both the Canadian men's and women's sevens teams have qualified for the Olympics but there are fears the spread of the coronavirus could delay or even postpone the Games.

The upcoming men's sevens tournaments in London and Paris are scheduled to proceed, but events in Singapore and Hong Kong have been postponed from April to October.

Paul said there are plans for the men's team to travel to Argentina for a series of games.

The scheduling of the final two tournaments of the season shouldn't affect selecting the Olympic team roster.

"I don't think there is too much fiddling around with the squad," he said. "I'll have some dilemmas but good dilemmas."

The Vancouver tournament attracted 74,456 people over two days to BC Place Stadium.

Spectators came in a variety of colourful and imaginative costumes.

There were simple outfits like loud shirts decorated with pineapples and matching hats or black-and-red lumberjack jackets. Fuzzy onesies, some with hoods, were popular, as were red-and-white suits dotted with maple leaves. Brown sheep sat besides pink furry pigs near pandas. There were a group of Sasquatch wearing Canadian toques and pink flamingos lapping beer.

Flags from all the participating countries waved.

The tournament is being played at the same time other sports events around the world are being cancelled or postponed due to the spread of the coronavirus.

"I know people love that event and have been waiting for it to come to Vancouver, but if you're sick, don't go," said Dix, a sports fan who has attended the event in the past. "Watch it on TV."

This report by The Canadian Press was first published March 8, 2020