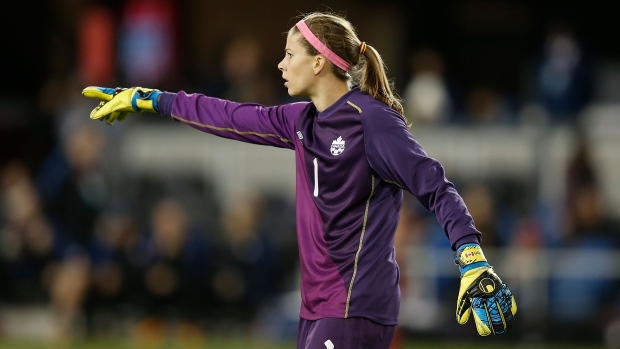 Stephanie Labbé is set to hang up her gloves.

The longtime Canada goalkeeper announced on Wednesday that she plans to retire in the spring of 2022.

The 35-year-old Edmonton native left Paris Saint-Germain after the winter break and plans to end her playing career following an upcoming CanWNT friendly.

Labbé was instrumental in Canada's capture of the gold medal at this past summer's Tokyo Olympic Games.

“The leadership, performances and confidence we saw from Steph this summer demonstrates the impact she has on Canada Soccer’s Women’s National Team,” Canada head coach Bev Priestman said in a statement. “I can’t think of a better way to go out after such dedication to the program than with the world class performances we consistently saw from her on the biggest stage possible to win this country a gold medal. I know Steph is ready to move onto the next phase of her life and on behalf of the team and Canada Soccer would like to thank Steph for her tireless commitment and what she has done for this country, she will be greatly missed.”

Capped 85 times by Canada, Labbé has appeared at three World Cups, two Olympics and four CONCACAF tournaments. On top of her Olympic gold medal, Labbé also has a pair of bronze medals.

Prior to joining PSG in 2021, Labbé also played for NWSL sides Washington Spirit and North Carolina Courage, as well as Europeans clubs Linkopings and Rosengard over her 16-year pro career.