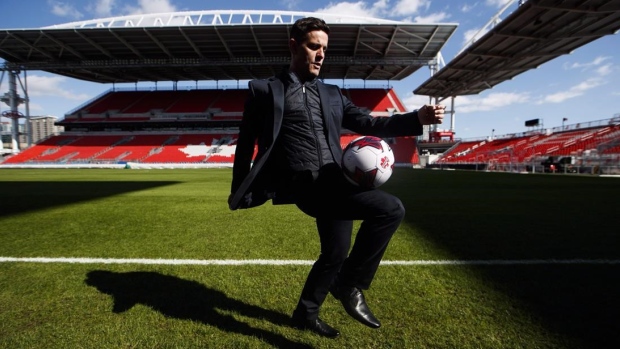 TORONTO — John Herdman has taken a few kicks in the teeth in recent weeks.

But the Canadian men's soccer coach remains optimistic about his team's future despite last month's shocking exit from the Gold Cup and the changing landscape of CONCACAF's World Cup qualifying format, which makes life more difficult for the 78th-ranked Canadian men.

Herdman prefers to see the glass half-full, even if Canada has to qualify the hard way — slogging through the second tier of teams in North and Central America and the Caribbean to get to the 2022 World Cup in Qatar.

"If we look at it the right way, it just could be one hell of a story," he said in an interview.

Herdman said his initial reaction to the revamped World Cup qualifying system was "shock and disappointment."

"We were in control of our destiny, moving into 2019, 2020, for the (CONCACAF) Nations League Group A to qualify for the Hex based on that," he added.

Then the rules changed.

In July, CONCACAF unveiled a World Cup qualifying road map that sends its top six teams — based on the FIFA rankings issued after the June 2020 international window — directly into the so-called Hex.

After round-robin play, the top three teams in the Hex book their tickets to the 2022 World Cup.

Teams ranked No. 7 to 35 in the region will play a separate qualifying round divided into eight groups. The pool winners advance to a three-tiered knockout phase with the last team standing facing the fourth-place finisher in the Hex to determine the CONCACAF representative in a FIFA intercontinental playoff that will send another team to the World Cup.

The wrong results and Canada may learn as soon as November that it will have to qualify the hard way, battling below the Hex just for a chance to get into a playoff to make an intercontinental playoff.

The revamped format came 16 months after CONCACAF heralded its new Nations League competition with qualifying based on a "newly developed CONCACAF Ranking Index."

CONCACAF called it "a modern indexing system for the region’s national teams which will guide the seeding of CONCACAF teams for qualifying to international tournaments going forward."

"The goalposts have moved in the last month, compared to what we had embarked on strategically," Herdman said after updating the Canadian Soccer Association's board Sunday on what lies ahead.

Herdman called the qualifying changes "a tough pill to swallow" because the plan had been to accumulate CONCACAF points. He said the Canadian men had vaulted past Jamaica last month into No. 6 in the CONCACAF index by Canada Soccer calculations.

A shock 3-2 quarter-final Gold Cup loss to Haiti, which climbed 18 places to No. 83 after the CONCACAF Championship, meant Canada trailed Jamaica by a small margin.

Wins over Martinique, at the Gold Cup, and French Guiana, in CONCACAF Nations League qualifying, produced no ranking points because the two countries are not included in the FIFA rankings.

"Looking forward we now have got a different challenge ahead. That's what I presented to the (Canada Soccer) board," he said after making his presentation Sunday in Toronto.

"We've re-strategized in the last two weeks. We've re-framed the mindset from disappointment to opportunity and we've looked at what it's going to take to qualify for the Hex and then ultimately for the World Cup in 2022."

Given FIFA's explanation for its ranking procedure is almost 1,300 words long, predicting future rankings is complicated.

Herdman says depending on what El Salvador and Panama do, Canada may still miss out on the Hex even if it keeps winning through next June.

For Herdman, that means beating No. 179 Cuba twice and getting a win and draw against the U.S., at a minimum. Winning the group would move Canada into the final four of the competition, likely against heavyweights like Mexico and Costa Rica.

Wins in the final four come with good ranking points. Herdman said Canada will also have to pick its friendly games with an eye to the best way of accumulating points.

South American opponents appear to be those most available in the international windows, he added.

But it still may not be enough. And Herdman says Canada can't just schedule friendlies willy-nilly, arguing that playing a game three days in advance of a key showdown with the U.S. would not help his team.

"It's a risk-reward situation and we have to navigate it very carefully," Herdman said. "It isn't just pulling games out of the sky. We have to be very deliberate."