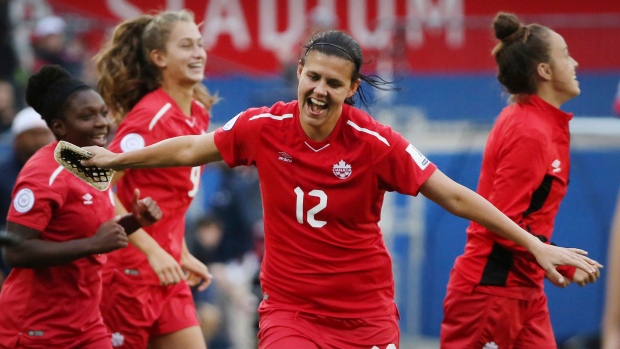 The draw for the 2019 Women’s World Cup in France was held Saturday in Paris.  Canada, ranked fifth in the world, was placed in Group E along with Cameroon, New Zealand, and the Netherlands.  The Canadians will play their first group game against Cameroon on June 10 at Stade de la Mosson in Montpellier.

They will then travel to Stade des Alpes in Grenoble to face New Zealand on June 15.  Canada plays its last group game on June 20 against the Netherlands at Stade Auguste-Delaune in Reims.

The top two teams in each group will advance to the knockout round, along with the four best third-placed teams.

Canada has qualified for every Women’s World Cup except the inaugural event in 1991, and has made it past the group stage twice in six previous tournaments.  The best result for the Canadians came in 2003, when they finished in fourth place.  In the 2015 Women’s World Cup held in Canada, the host nation placed sixth after losing to England in the quarter-finals.

This will be captain Christine Sinclair’s fifth Women’s World Cup.  She is one of nine players to have scored in four different World Cup tournaments, recording nine goals in 17 matches all-time.

Here is what you need to know about Canada’s upcoming opponents at the 2019 Women’s World Cup.

PAST WORLD CUP APPEARANCES & OTHER TOURNAMENTS

The Netherlands made its Women’s World Cup debut in 2015. They finished third in Group A behind Canada and China, but advanced to the knockout round as one of the top third-place teams.  They lost 2-1 to Japan in the round of 16.

The Dutch are coming off their greatest success at a major tournament as winners of the 2017 UEFA Women’s Euro.  The Netherlands, ranked 12th in the world at the time, knocked off top-10 opponent Sweden in the quarter-finals before shocking fifth-ranked England 3-0 in the semis.  The Oranje didn’t drop a game in the tournament, and only allowed three goals in six games, with two of those coming in the final against Denmark.  Captain Sari van Veenendaal was named the best goalkeeper of the 2017 Euro.

The Dutch didn’t take an easy path to qualify for their second Women’s World Cup.  Despite losing just one game and finishing with a goal differential of +20, the Netherlands finished second in Group 3 of the UEFA qualifiers after losing to Norway 2-0 on the final matchday.  The Norwegians earned an automatic berth in the World Cup, while the Dutch had to enter the UEFA playoffs with Switzerland, Belgium and Denmark.

Forward Vivianne Miedema played a key role in the Netherlands’ qualification.  She had five goals in the group stage, and scored in each leg of the playoff final against Switzerland.  The 22-year-old also netted two goals in the 2017 Euro final.  Playing for English club Arsenal in the FA Women’s Super League, she already has 14 goals this season, including two hat tricks.

Midfielder Lieke Martens finished with three goals and picked up Player of the Tournament honours in the 2017 Euro, and was later named Best FIFA Women’s Player of the Year, the first Dutch woman to win the award.  She finished 11th in voting for this year’s women’s Ballon d’Or.

Midfielder Daniëlle van de Donk and forward Shanice van de Sanden are two more to watch.  Van de Donk, who plays with Miedema on Arsenal, was voted the team’s Player of the Year last season and has eight goals so far this year.  Van de Sanden scored three times in the Netherlands’ qualifiers.  Playing for French club Lyon, she set up three goals for her team in extra time of this year’s Champions League final.

The Dutch have never beaten Canada in 12 meetings.  The two teams tied 1-1 in their group stage match at the 2015 Women’s World Cup.  They most recently played each other in a friendly in 2016, which the Canadians won 2-1.

PAST WORLD CUP APPEARANCES & OTHER TOURNAMENTS

New Zealand has qualified for five of eight Women’s World Cups, but has yet to make it out of the group stage.  In fact, the Football Ferns are still looking for their first World Cup win.  They have played more Women’s World Cup games without a win than any other team, with three draws and nine losses in 12 games.

New Zealand had recent success at the Under-17 Women’s World Cup, finishing on the podium after defeating Canada 2-1 in the third-place game.  It was the first time New Zealand had reached the final four of any World Cup.

The New Zealanders cruised through qualification, earning their fourth straight title at the OFC Women’s Championship.  The Football Ferns finished 5-0-0, outscoring opponents by an incredible margin of 43-0. They beat New Caledonia 8-0 in the semi-final, and then repeated the score against Fiji in the final.  They have won 16 consecutive World Cup qualifiers, and kept clean sheets in their last 15.

But it wasn’t all good news for New Zealand.  Former captain and centreback Abby Erceg, who has 132 caps with the team, retired from international play last year, citing “unfortunate and unfavourable circumstances within the organization that is NZF” as her reason.  She did come out of retirement earlier this year to take part in a pair of friendlies, and played a crucial role in helping to obtain equal pay for the women’s team.  She then retired again in May.

New Zealand’s lone win against Canada came over 30 years ago in 1987.  Since then, the Canadians have won six of the 10 meetings.  They most recently faced off in the group stage of the 2015 Women’s World Cup, which ended in a scoreless draw.

Cameroon is preparing for its second-ever Women’s World Cup.  In their tournament debut in 2015, they finished second in Group C behind Japan.  Ranked 55th in the world at the time, Cameroon recorded a convincing 6-0 win over Ecuador, the biggest win by a CAF team at a Women’s World Cup.  After losing 2-1 to Japan, the Cameroonians then shocked 19th-ranked Switzerland 2-1 to secure its spot in the knockout round, where they lost 1-0 to China in the round of 16.

The Indomitable Lionesses qualified for France 2019 as the third-place team at the 2018 Africa Women Cup of Nations.  They finished first in Group A with two wins and a draw to advance to the knockout stage.  After losing in penalties to Nigeria in the semi-final, Cameroon needed a win against Mali in the third-place game to advance.  After blowing a 2-0 lead, the Cameroonians persevered to win 4-2 and secure their spot in next year’s World Cup.

Captain Christine Manie scored two goals in the tournament, including a stoppage time goal against Mali in the third-place game to secure Cameroon’s qualification.  She also scored in extra time in 2014 qualifiers that sent the Indomitable Lionesses to their first Women’s World Cup.

Forward Gaëlle Enganamouit, who had one goal in this year’s qualifiers, also netted a hat trick in Cameroon’s aforementioned 6-0 win against Ecuador in 2015.  She is the only African player to score three goals in a game at a Women’s World Cup.

Canada has never faced Cameroon at the senior level.  The countries’ under-17 teams met in the group stage of the 2016 U-17 Women’s World Cup.  Canada won that match 3-2, with Jordyn Huitema scoring in the 3rd minute.