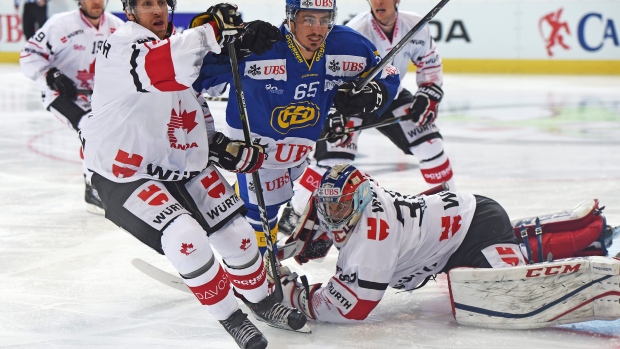 DAVOS, Switzerland — Andrew Ebbett's goal late in the third period stood as the winner as Canada beat host HC Davos 4-3 on Tuesday in round-robin action at the Spengler Cup.

Mason Raymond, Cory Emmerton and Jacob Micflikier also scored for Canada, who bounced back from a disappointing 7-4 loss to HK Dinamo Minsk on Monday.

"It was a huge win for our squad, getting us into the win column," said Raymond. "The host team came at us hard and we reacted well. We are coming together as a group, improving every day.

The Canadian squad now must wait for the results of the final preliminary-round games on Wednesday to determine who and when they will play in Thursday's quarter-finals.

"It's a gutsy win for our boys against a team that played us extremely hard," said Canada coach Luke Richardson.

"Our power play came through again with a couple of key goals, and the penalty kill was solid."

Per Ledin struck twice for HC Davos (0-1-0), while Daniel Rahimi also found the back of the net.

Emmerton had a short-handed breakaway eight minutes into the second period, showing patience to put the puck past Davos goalie Gill Senn for a 2-1 lead.

Rahimi's shot from the point made it through traffic and past Montreal Canadiens prospect Zach Fucale in net for Canada to tie it 2-2 just over five minutes into the third period.

Micflikier responded on the power play minutes later. He fired a low wrist shot on net, with his teammates screening Senn, to make it 3-2.

Ebbett redirected a shot from Genoway, bouncing it off the ice and into the goal to give Canada a 4-2 lead.

Ledin's second goal of the night cut into that lead with just under five minutes left to play in the third, but Canada held on for the win.