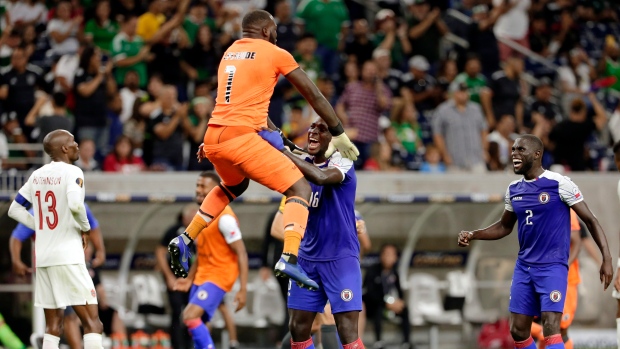 HOUSTON — Canada has been eliminated from the CONCACAF Gold Cup.

Haiti reached the semifinals of the tournament for the first time, overcoming a two-goal deficit in the second half to beat Canada 3-2 on Saturday night.

"We are all gutted," said Canadian coach John Herdman.

"We are disappointed in that second-half performance because we gave Haiti everything that they wanted. We've got all the talent here, but at the end of the day Haiti were very direct and made it difficult for us. That was tough.

Jonathan David scored on a free kick in the 18th minute, his tournament-high sixth goal, and No. 78 Canada doubled its lead when Lucas Cavallini beat goalkeeper Jhony Placide in the 28th minute for his fifth goal.

Duckens Nazon cut Haiti's deficit in the 50th and Herve Bazile tied the score in the 70th with a penalty kick after he was taken down by Marcus Godinho.

Wilde-donald Guerrier scored the go-ahead goal in the 76th.

Canada thought it scored an equalizer just five minutes from full time, but captain Atiba Hutchinson was just offside before he beat the goalkeeper Johny Placide.

"This is a learning experience for everybody," said Hutchinson.

The 101st-ranked Haitians will play Mexico or Costa Rica on Tuesday at Glendale, Arizona.