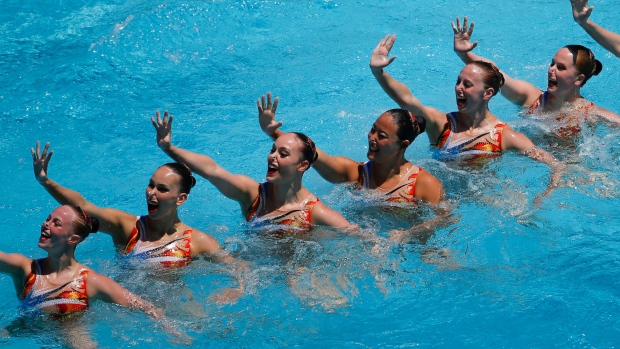 RIO DE JANEIRO - Canada's synchronized swimming team will not be going to the 2016 Rio Games after placing fourth on Sunday at the Olympic qualification tournament.

Canada narrowly missed achieving its goal as the top-three nations at the event all qualified for the upcoming summer Olympics.

Despite a powerful performance of its new "Fire and Ice," Canada was unable to catch up to Italy, which was 0.5 points ahead after Saturday's technical program. The Italians managed to keep their lead in Sunday's free team event and, in the end, 0.7 points was the difference between the two countries.

"Fourth position is always the hardest to deal with, especially when the margin is so small," said Canadian team captain Marie-Lou Morin. "But I'm so incredibly proud of this team who fought so hard to realize our dream. I will never forget the past few months with this incredible group of teammates and friends."

Canada will be represented in synchronized swimming at the Olympics in the duet event. Jacqueline Simoneau and Karine Thomas qualified last summer at the Toronto Pan Am Games.