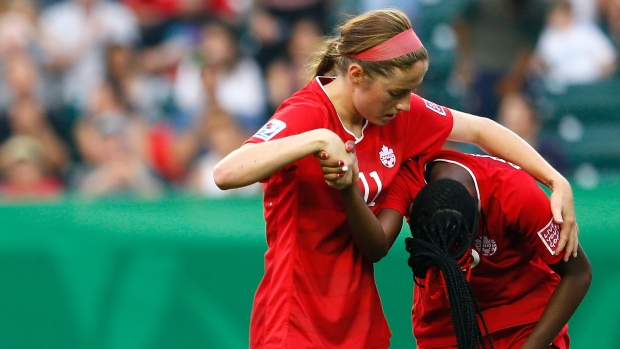 NATAL, Brazil - Janine Beckie scored the first goal but host Brazil responded with three of its own, including two from Monica, for a 3-1 victory over Canada on Sunday in the final of the international women's soccer tournament in Natal.

Monica's first goal of the game, on a header off a corner kick in the 63rd minute, stood as the winner as Brazil remained undefeated in the four-team tournament.

"I think the girls gave it everything they could tonight," said Canadian coach John Herdman. "Brazil just had a little bit more quality on the attack, whether it was with their set pieces or delivery."

Canada finished second after going 2-1 in group play. The Canadians' only other loss of the tournament was against Brazil in the final game of the preliminary round.

Beckie opened the scoring in Sunday's game with a shot on the run down the left side early in the second half.

Less than a minute later, Brazil tied the game on a goal from Andressa Alves. Alves was given a yellow card when she celebrated her goal by running up a set of stairs to hug her family.

Monica made it 3-1 on another header from a corner kick with 10 minutes remaining in the second half.

"We know with Brazil that you have to open yourselves up a little bit to get something off them," said Herdman. "There were two great chances in the second half, and had we capitalized on them the game could have gone a totally different direction."

Canada's next international tournament will be the 2016 CONCACAF women's Olympic qualifying tournament in February.